Back to Features > A new epoch

From connectivity to sustainability, the future of the rail industry looks different. By Aytek Yuksel

Zephyr locomotives, named after the Greek god of wind, got everyone’s attention in the 1930s with their shining stainless-steel looks and high speed. They also re-invigorated the interest in the rail industry and became the poster child of the industry for decades.

The next big transformation in the rail industry will have less to do with steel and more to do with silicon and different fuels. We will likely not see the looks of locomotives change dramatically, yet what is under the hood will make the difference. The following are three ways the rail industry’s near future will be different. 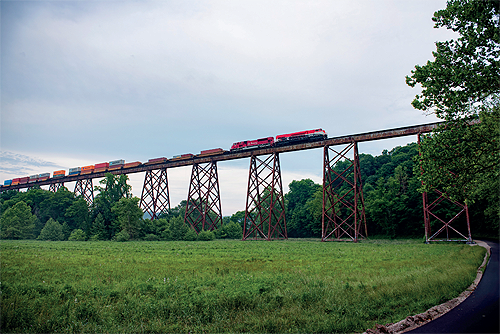 collected, and machine learning can lead the execution of tasks; but connectivity brings these together and amplifies each one’s contributions.

Meanwhile, 5G expands the capacity of connectivity and enables it to be more reliable with much lower latency. For the rail industry this means the number of IoT devices can be increased on locomotives without congesting the wavelengths. Higher reliability and lower latency mean mission-critical tasks requiring instant intervention (commonly not handled by machines), can now be handled through connected devices.

Locomotives are getting increasingly connected, and the emergence of 5G will further fuel the use of connectivity within and beyond locomotives.

Meanwhile, there are emerging power system technologies being trialed by the rail industry. These include fuel cells, both solid oxide and proton-exchange membrane, batteries and hybrid solutions.

No. 3: Decreasing emissions will lay the path towards the all-renewable future
For many sectors where energy is used, it is commonly agreed the final destination is an all-renewable future. Meanwhile, the pace towards the destination varies significantly. For example, about 30 per cent of the electricity we use today is from renewables, and it is forecasted after 2040, we will be getting more of our electricity from renewables than fossil-fuels.

A key focus during our journey towards an all-renewable future is lowering the emissions of the leading power system technologies. For instance, emissions of nitrous oxides and particulate matter of diesel engines have decreased by over 80 per cent over the last two decades. Technologies such as selective catalytic reduction (SCR) and exhaust gas recirculation (EGR) enabled this significantly reduced environmental footprint.

Going forward, decreasing emissions will continue to be a focal point. In the near term, diesel-hybrid and fuel cell applications will take the lead on lowering emissions. For example, during the second quarter of 2020, two trains powered by Cummins Inc. fuel cells completed an 18-month trial in Europe with over 180,000 km traveled. By 2022, there will be 41 of these types of trains powered by Cummins fuel cells running in Europe, making Cummins the leading provider of fuel cells for trains globally.

The rail industry has gone through its own share of changes over the last few decades, but the current decade is likely going to be a transformative one. Rail professionals’ minds are occupied by topics ranging from technology choices to talent gaps; meanwhile the industry is embracing a diverse set of power solutions and speeding up the connectivity journey.

Aytek Yuksel is a Content Leader at Cummins. Cummins Inc. is a global technology company designing, manufacturing, distributing and servicing a broad portfolio of reliable, clean power solutions; including diesel, natural gas, hybrid, electric and other alternative solutions. Established in 1919 and headquartered in Columbus, Indiana (US), Cummins serves customers in more than 190 countries and territories around the world.
www.cummins.com/alwayson