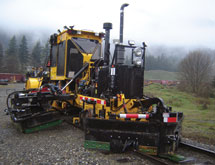 As a company specializing in export management for railway equipment, AMECO has been witness to one of the largest paradigm shifts the global railway industry has ever seen. However, despite the changes, AMECO continues to be a leader in providing railways worldwide with the equipment they need to remain on the right track. Chairman Howard McCall says this is due in large part to the company’s expertise and dedication to quality products.

“I would say our greatest strength is really two-fold,” McCall says. “It’s the support from our principals that support us from a technical standpoint and from a quality manufacturing standpoint. We sell quality goods with a significant amount of technical expertise behind them.”

Founded in 1946 to serve the construction equipment industry, one of AMECO’s most successful products was a ballast tamper used on railway tracks. The company leveraged this success into a line of railway equipment from a variety of manufacturers.

Today, AMECO is the most diversified supplier of railway products in the world, according to the company. The products it supplies include diesel locomotive engine parts, maintenance of way track equipment, specialty workshop tools and locomotive driver training simulators.

In the time AMECO has been in business, it has experienced a number of ups and downs in the international railway industry. But McCall says none has had quite the same impact as the change it went through in the 1990s. Before that time, the vast majority of railway systems worldwide were government-owned and operated. However, a wave of privatization changed all of that, and today virtually all of AMECO’s customers are private entities.

The most substantial effect of this change was the fact that private capital didn’t go as far at first, meaning many railway projects were stalled or outright abandoned. Government-owned railway projects could count on funding from the World Bank, but there wasn’t nearly as much confidence during the transition to private ownership, McCall says.

AMECO survived that period through the strength of its quality products and willingness to work closely with customers to make sure it fulfilled all of their needs, McCall says. Today, railway projects are plentiful again, but this has brought new challenges for AMECO to face.

President Brad McCall notes many of AMECO’s customers have started demanding more locally sourced equipment. One prime example of this is in South Africa, which has pushed for companies to use products made in South Africa. Because the majority of AMECO’s products are made in the United States, the company has had to find ways to help its customers satisfy these new requirements.

Howard McCall says this is not the only way in which AMECO is working to help its customers succeed. The company is committed to helping railways around the world become more energy efficient. “We always say that if you can find a way to save a railroad a fraction of one percent of their fuel costs, they’ll build a statue in your honor,” he says.

For its part, AMECO is providing railways with trainer simulators that teach engineers how to operate trains for maximum efficiency. The company also is making strides with equipment aimed at positive train control, a communications-based train-control system that allows more trains to operate at closer intervals, thus putting more trains on the tracks.

McCall predicts AMECO will continue to hold its place in the global railway industry for a long time because it excels at maintaining long-term relationships. “I see us doing more project-oriented work on a more turnkey basis, from the engineering up through the development and the testing,” he says.