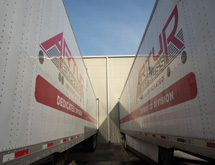 Since the beginning of this year, St. Louis-based Artur Express has been connecting interested drivers with a leasing program that will enable them to become their own bosses with their own rigs. The company also offers its drivers a group lease insurance policy.

“We are adding five trucks a month under leases, and we are pretty much helping these guys become independent,” Co-president and owner Artur Wagrodzki says. “We feel this is going to be a big positive thing for us, and for years going forwards, this leasing is going to generate 50 to 75 trucks a year for our company.”

That increase in drivers will enable the company to accommodate its 35 to 40 percent annual growth. Artur Express Inc. relies exclusively on its 400 independent contractors to haul the approximately 800 dry vans in its fleet, which is scheduled to increase by 200 this year. Tokarczyk says the company has 32 refrigerated trailers in its fleet and that 70 percent of its trips are drop-and-hook.

“That’s a big challenge keeping every trailer accounted for and making sure the trailers don’t sit for no reason in somebody’s yard,” Tokarczyk stresses. “Our job here internally is to make sure that we piece these customers together and create a flow for our trucks to pretty much move nonstop and eliminate deadhead as much as possible, so every mile is paid for.”

Artur Express keep its 5,000 to 6,000 monthly loads full with the help of an exclusive software system from St. Louis-based Ditat that its contractors access in their cabs on tablets. “We have been working with them for about 10 years, and they have a great solution right now for their company,” Wagrodzki says. “We also have a lot of additional features that pretty much only our company is using right now, and that’s been true for many, many years. We are able to piece together this huge puzzle and make sure everything flows together.”

The tablet computers allow the contractors to communicate from whatever vehicle they are in. “We can track the driver, we can pretty much send him load offers, they can accept or reject loads, they can post wherever they want to go,” Wagrodzki lists. “We know all our guys are independent and they have special needs, and we want to address those needs as they come up.”

Wagrodzki maintains this level of technology keeps the company’s contractor turnover rate to 20 percent, “which in this industry is very, very good,” he says. “We not only work for our customers, we want to make sure that our contractors are extremely happy. That is what the future is in – these guys. We all need those trucks to move that freight, and we take very good care of them as well as the customers. We need all the elements to work at the highest level to provide those types of services for our customers.”

Besides the company’s team of recruiters, Artur Express attends all the major trucking shows. “We go to shows pretty much every month, and the shows generate a lot of owner/operators,” Co-president and owner Tom Tokarczyk adds. “Our owner/operators speak highly of us and are able to recruit a lot of our independent contractors.”

Artur Express pays half of a shipment’s fee to contractors when they pick up a load, which functions as an advance on expenses like diesel fuel so they do not have to finance the load themselves. “We pay the other half to these guys within five days via direct deposit instantly,” Tokarczyk maintains. “We don’t get any paperwork from them.”

Instead, Artur Express subscribes to a service that has scanners at truck stops, so contractors can scan paperwork and send it to Artur Express instantly. “When those tablets and service came onboard, we were able to adapt to it very quickly,” Wagrodzki remembers. “It was extremely expensive at first, but we were way ahead of the game and able to implement those different applications and communicate with drivers via those tablets, and it’s working great.”

The tablets have also eased dispatchers’ tasks of transmitting information to the drivers about the location and distance to upcoming loads. “Instead of dispatching a truck over the phone – which might take 10 minutes – it takes dispatchers literally 10 seconds to send this information,” Wagrodzki points out.

Founded with a single truck in 1998, the company is celebrating its 15th anniversary this year. Wagrodzki and Tokarczyk attribute the company’s success so far to helping their independent contractors run their businesses.

“We mainly pay really well and really fast,” he says. “Word-of-mouth is the best advertising out there. We get more and more exposure when we do good things. We retain probably 99 percent of our customers, so our prices are structured pretty well. That’s pretty much given us the edge.”