Back to Features > Avoiding Accidents 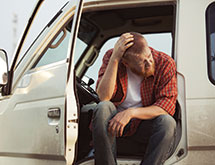 Collisions are an unfortunate part of the trucking business, and busier highways have led to a substantial increase in the number of injury accidents involving large trucks, with the Federal Highway Administration documenting a 9 percent jump in such accidents between 2011 and 2012.

Though passenger vehicle drivers usually are at fault in accidents involving large trucks, it is the vehicle driver who typically initiates litigation against the truck driver and his or her company. Attorneys representing vehicle drivers monitor your every single action, policy and procedure following an accident in an effort to portray you and your employer as irresponsible parties who put profits ahead of safety.

However, few plaintiffs’ lawyers or juries understand trucks. Most of them are scared of big rigs and think every collision is the truck driver’s fault. Naturally, car drivers will claim their damages are astronomical, regardless of the actual injury. While nothing could be further from the truth, whether you drive the truck or run the company, the most important thing you can do to is plan for the inevitable.

Putting the pieces in place

How do you plan for a collision? If you own a company that puts trucks on the highway, then you need drivers that you trust and equipment that is in good working order. Call prior employers to verify driver experience, even if the previous work was not in the trucking industry. Verify that new hires are competent drivers, not just that they have a valid commercial driver’s license. Most importantly, train your drivers and risk management staff on post-accident procedures.

This article is designed to provide basic guidance to drivers, trucking companies and risk management employees on the do’s and don’ts when a collision happens. It is not intended to replace the advice of your attorney.

Following a wreck, your number one priority is the safety of drivers involved in the accident. The driver of the big rig should move his or her tractor out of the roadway if it is safe to do so. Activate the truck’s flashers. As soon as it is practical, make sure the reflective triangles are placed in such a way to warn passing drivers. Remember, secondary collisions from other motorists claim more lives than initial collisions between a tractor and car. Flares also help. And remember, if it is not safe to move the tractor, then leave it where it sits.

•Check on other driver

Emotions typically run high after a collision for all parties involved. As a professional driver, you are probably scared and a little angry that the car didn’t appear to do anything to avoid the collision. From a legal standpoint, the time immediately after a collision can be the most dangerous from a driver’s perspective because everything the driver does and says will be scrutinized by the other party, the police, and possibly a jury down the road.

It is important for drivers to anticipate that emotions will be high, and that those emotions can cloud one’s thinking. Most of those emotions are driven by adrenaline, which can make truck drivers say stupid things. Following a collision, even the smartest people revert to their basic instincts and react rather than think. Drivers need to be carefully trained on how to react properly following a collision.

•Keep calm and carry on

Drivers should never accuse another motorist of causing a collision. Never apologize to the other driver and never use dangerous phrases, such as “I didn’t see you” or “I couldn’t stop.” Drivers should focus on calmly analyzing the situation and speaking only when necessary to avoid saying something in the heat of the moment that could bite them later. Think, rather than speak.

After the vehicles stop moving, if it is safe to do so, drivers should exit their tractor and calmly check on the other driver. Since this is your first personal contact with the other driver everything you say and do matters.

Regardless of who caused the collision, Now is not the time to worry about fault. Ask the other driver if he or she is OK – but do not engage the other driver in conversation, even if it seems unrelated to the accident. Your goal is to determine the extent of their injuries to see what, if anything, you can do to help. You may need to relay the symptoms you see to the police or ambulance personnel, so look at the driver’s eyes. Do the other driver’s eyes respond to your voice? Are their eyes glassy? These are red flags. Did the other driver’s airbags activate? Are any passengers bleeding? This information might be helpful to emergency responders.

After getting to safety and checking on the other driver if it is safe to do so, call 911. Calmly, slowly inform the operator of only the following:

1) location of the collision;

3) number of vehicles and people involved;

4) your name and phone number.

Ask the operator how soon the police and emergency responders (if necessary) will arrive. Thank them politely and hang up the phone. Remember: Whatever is said to a 911 dispatcher can be – and often is – used as evidence in court.

Now that you have called 911 and checked on the other driver, it is time to do your homework. The big rig driver should call his or her safety department and report only the facts. Describe which lane you were traveling in. When did you use your truck’s turn signals? Where were you coming from, and where were you going? What did the other vehicle do? Where did the other vehicle come from? Where did you first see it? Where did it stop? Who are the witnesses?

The notes that risk management puts together directly after a collision often are key exhibits at trial. Notes should never assign fault to either driver. You can discuss that verbally later. Right now, your job is to convey true information and minimize potential damages.

Truck drivers need to casually observe the driver of the other vehicle. Does he or she smell like alcohol? Is there evidence of other drug use? Were there any pills, alcohol or drugs in the other car? Was the other driver talking on a cell phone, texting, etc.? Were they wearing their seat belt? Observe how the driver acts after the collision. Are they walking around and talking? Do they act hurt? Do any specific actions make it appear that they are uninjured? Make sure to take careful notes.

A truck driver also should take photos of the damage to the vehicles if it is safe to do so. Make sure those photos are sent to your Safety Department and retained for later use.

•Get a second (or third) set of eyes

It is common for other motorists to stop to help. A truck driver needs to politely visit with these people. If they witnessed the accident firsthand or have other important information, then the driver should get their name and phone number. He or she should use their phone to snap pictures of the vehicles involved, as well as the license plates from helpful witnesses.

If this is a serious accident, then a safety department representative should call the company’s attorney immediately. The attorney should participate in the investigation in order to make sure that the investigation is privileged. Copy the attorney on any emails and make sure that the emails have “Attorney-Client Communication” at the top. It may also be helpful to locate an accident reconstruction expert to visit the scene as quickly as possible so they can preserve as much of the scene data as possible. If the case goes to trial, this data can be used to create a 3-D image or video of the collision, which juries find very helpful.

At some point, the responding police offer will approach the tractor driver, who should be carefully trained beforehand to calmly and politely provide just the facts about the accident. Give the officer the “who, what, when, where and why,” but leave out the opinions and speculation about why the other driver did what he or she did. Remember, just the facts – emotional accounts or statements saying who was at fault will only make the situation worse.

Again, never use dangerous phrases such as “I didn’t see them,” or “I couldn’t stop.” Explain only the facts as you know them (described above, including whether the other driver used their turn signals, was acting strangely, had their lights on, etc.) Do not use specific speeds, but identify if the other vehicle was traveling faster than you.

This sounds simple, but it’s easy to forget the need for a driver involved in a collision to take a U.S. Department of Transportation (DOT) drug/alcohol screening. If the regulations require such a screening in your accident, then make sure you take the test. If the regulations don’t require a DOT test, then do not do so outside of your standard random screen policy.

Individuals in your safety department should make absolutely sure that they confer with the driver over the phone before he or she appears for the test. If there is any question whatsoever that the driver could fail the test, then it is best to involve a trucking attorney immediately. If the police officer takes the truck driver to the lab, then the attorney should consider getting a second DOT test a few hours later. The second test is privileged and can prove helpful in the legal process. If the second test is positive, it will do no more harm than the first positive test.

Immediately preserve the driver’s log books, all GPS data, and all messages between the driver and the trucking company. Even though the Federal Motor Carrier Safety Administration permits these records to be retained only for a short period, most plaintiffs’ attorneys will try to argue to the court and jury that you should have saved the records and that they would have shown something helpful to the other side. This is simple and doesn’t cost much, if any, money – save the records!

No driver or company wants to experience the turmoil resulting from a serious motor vehicle accident. The fact that more than 25,000 individuals were injured in accidents involving large trucks in 2012 alone makes it clear that trucking firms need to be certain that their employees are trained and that they will respond appropriately when the inevitable occurs. Preparing for a highway collision is no accident.