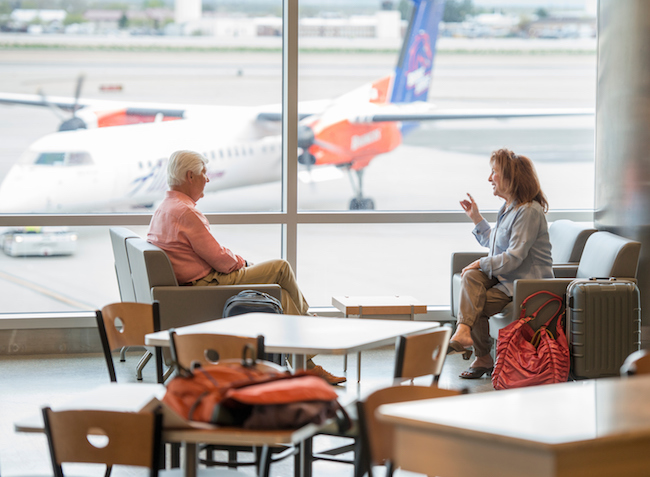 Boise Airport aims to make the city of Boise the most livable city in the country.

Boise Airport is the largest airport in the state of Idaho, serving nearly three million people annually in the metropolitan area, including all of southwestern Idaho and parts of eastern Oregon. As benefits its important regional status, the airport has many things in its favor.

“We have six airlines that serve the airport, with 20 nonstop destinations,” Airport Director Rebecca Hupp says. “We have a full line of food and beverage, as well as news and gift stores. Last year, a number of our concessions won industry awards from the International Airport Council, including best in class for our size. So we have a great concessions program. One thing that may be unique is that we offer an electronic branch of our Boise library at our airport as well.” 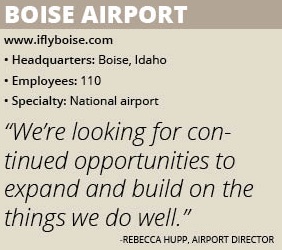 What sets Boise Airport apart from its competitors, including other local airports, is the easy access it provides to its customers, according to Hupp. “Our airport is only about six miles from downtown, so it is very close to the center of the city,” Hupp explains. “We have extremely convenient parking, check-in and security screening.”

In regards to its customers, the airport views them as belonging to either of two main groups: the airlines and the traveling public. “The airlines we serve rent space from us and provide a service to the public. They expect us to have efficient operations and a low-cost structure,” Hupp says. “Our passengers are interested in convenience and amenities. We did a passenger survey last spring and fall, and the majority of categories in our airport scored more than 80 percent for satisfaction. So our passenger ratings are very strong.”

The Boise, Idaho-based airport remodeled its concessions in 2015, investing nearly $5 million in the facilities. It also introduced a mix of restaurants that offers both local and national brands, such as Einstein Bagels and Smashburger.

“Introducing local brands was our way of making the airport feel like Boise as opposed to just any generic airport,” Hupp says. “At our airport you see some of the restaurants and brands that you see in our downtown area, which has been very popular here. It’s also a great way for us to showcase our city.

“For example, we now have a local restaurant called Bardenay, which is known for distilling their own spirits,” she continues. “It’s a very well-known restaurant in the Treasure Valley, and the design matches the bar and facility of the downtown location. We now have River City Coffee as well, which is a local cafe that offers coffee, pastries and baked goods. We also have quite a bit of public art in our terminal, which is another amenity that adds to the atmosphere.”

In addition to the convenience of the airport’s restaurants and amenities, passengers can download a mobile app called Grab that allows them to order food before arriving to the airport. “You can either specify a time, or just order and it will be ready in 15 minutes,” Hupp says. “So we like to say that the food is dangerously convenient.”

Hupp describes Boise as a growing community with a great economy and a progressive and visionary outlook. A number of companies headquartered there contribute to its economy.

“We are a very fast-growing region and have experienced 9 percent passenger growth the last two years,” she says. “We expect that trend to continue into early 2017 based on airline schedules already published.  The business environment in our state and region allow companies to invest and grow here, which enables us to have a robust community that supports the airport.”

One of the airport’s keys to success is its infrastructure. “Twenty years ago the airport had purchased a significant amount of land. We now have the facilities and properties we need to grow the airport,” Hupp says. “We built a new terminal in 2003, but it was built in a fiscally conservative way. That has allowed us to have a low cost structure for the airport, which is incredibly important.”

The airport’s employees also play an invaluable role in its success. “They undergo rigorous training, including security and operations training, which is related to operating the airport environment,” Hupp says. “In addition, we have customer service training for our employees, a very strong sense of culture which reinforces our vision, employee recognition events and employee feedback mechanisms.”

Because the city of Boise owns and operates the airport, Boise Airport’s vision is to make Boise the most livable city in the country. “That ties directly into everything we do everyday, whether it’s the person sweeping the floor or the person sweeping the runway,” Hupp says. “We know that our role is making sure we provide the aviation infrastructure so that travelers can get to and from Boise as efficiently as possible, because that’s part of our vision.”

Hupp notes that three core values guide the airport’s team members every day. “The first is ‘one city, one team,’ which means we’re all working together to make everything happen and find the best solutions,” she explains. “The second is ‘citizen experience with wow,’ which focuses on providing great citizen and customer service in order to create a great ‘wow’ moment. The final one is that we are always looking for ways to improve.”

Always looking ahead, Boise Airport is updating a 20-year comprehensive master plan. “We’re looking for continued opportunities to expand and build on the things we do well,” Hupp says. “I mentioned that we built a new terminal in 2003; by 2020 we’ll be looking at building the next concourse, because by then our operation levels and passenger traffic will have grown to the point where we will need that additional infrastructure.

“We are constantly looking at opportunities to add new air service and we’re also looking at the other segments of our business,” Hupp concludes. “Though we spend a lot of time talking about passengers, we do have other businesses that are important to the airport and community, such as general aviation, corporate business jets, the military that operates out of the airport and our cargo carriers. Ultimately, we’re looking at how all of those pieces fit together to create a plan to further enrich our airport and city.”