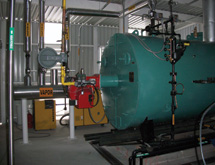 After 20-plus years in the U.S. market, Bulkmatic Transport had its operations down to a pretty successful science. The company’s trucking, rail transloading and warehouse operations handle dry bulk deliveries across the nation. In 1996, at the urging of its international customers, it began providing the same services in Mexico and it determined to do it with the same quality, knowing that’s what customers were expecting.

The company’s transloading services are a main draw for customers since traveling by rail is a cheaper option than trucking. It owns 10 transloading facilities throughout Mexico. Raw materials coming from the United States make the long haul via rail and are transferred from rail car to trailer to make the final short distance to the factories that take the raw material and create a finished product. If you add up Bulkmatic’s Mexico assets, it equals 22 miles of rail, which is the length of 1,500 rail cars, and 750,000 square feet of warehouse space. The company has ensured that all of its 10 terminals execute the same level of service whether it’s in Monterey, Toluca or Mexico City.

“We have very strict standards for our terminals,” says Francisco Soto, president of Mexico operations. “All of our terminals in Mexico are fenced. We have security with video cameras. They are paved. We have rail scales and truck scales. We operate 24/7 and have armed guards at every terminal. These are our must-haves and our minimum requirement even though not all of our competitors have them. But it gives our customers confidence; they might not have seen our terminal in Mexico City but they know Monterey. So they know what they saw in Monterey is what ‘will be’ Mexico City; they are confident the product will be secure.”

That consistency of quality is what has attracted well-known international companies such as Exxon, Hershey, Kraft and Coca-Cola to work with Bulkmatic. Because of its long history in the United States, it knew that product integrity and on-time deliveries were of utmost importance. So, the company has trailers dedicated to specific types of products and a thorough cleaning system to wash out trailers  before putting a new product on the trailer – ensuring product integrity. It also performs maintenance in-house for its trailers and tractors to decrease downtime and delayed deliveries caused by failing equipment.

Even with all the similarities in services, however, different countries have different demands and to be successful, Bulkmatic Transport knew that its Mexico operation couldn’t simply be a carbon copy of its U.S. counterpart. For one thing, the need for security was exponentially greater.

“There are many factors that affect the way we do business and one of them is the black market,” Soto explains. “Security is very important, especially within the last year.”

With the increased risk of cargo hijackings, Bulkmatic Transport has increased its security measures. The greatest variable in preventing theft, Soto says, is having trustworthy employees. In Mexico, the company is able to verify criminal and financial backgrounds and also administer lie detector tests to weed through applicants. And once it finds quality, trustworthy employees, Soto says the higher-than-average pay helps to retain them, resulting in low turnover.

Bulkmatic also invests in technology to keep drivers and the cargo safe. Each truck is fitted with a GPS tracking device that also allows the company to communicate with drivers. If a unit is in danger of being hijacked, Bulkmatic can activate the brakes remotely and prevent that from happening. The company maintains a close relationship with police officers in each district it operates, but it also retains in-house security personnel who can reach nearby scenes very quickly.

“We actually have very low incident rates,” Soto says. “Because of that, customers are willing to pay more because of the service we provide. We are familiar with their security and quality requirements and we even exceed those requirements. We are not the lowest upfront cost but we are the lower cost at the end of the day because of the many value-added services we provide.”

Soto says Bulkmatic has created a culture where employees don’t see themselves as just part of a logistics company, but a service provider that goes above and beyond to exceed customer expectations. That attitude will serve it well as it moves into new markets.

“We are exploring growing throughout South America, specifically in Colombia,” Soto says. “Just like we saw an opportunity in 1996 to go to Mexico, we’re seeing that Colombia is going to move. We’re already talking to customers and we find that many of our customers have operations in Colombia, but they are somewhat old-fashioned. We can bring modern capabilities to Colombia just like we did for Mexico. Whatever company gets there first, is going to be there forever.”