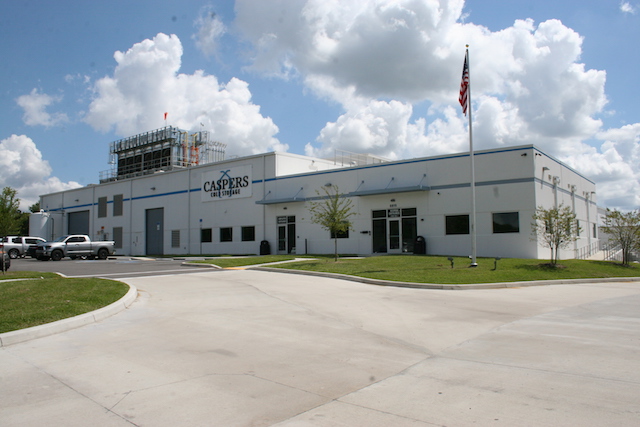 Caspers Cold Storage & Distribution nears full capacity at its state-of-the-art facility in Tampa, Fla., as it comes to the end of its first full year as a third-party logistics provider.

For nearly 30 years, McDonald’s franchisee Caspers Cold Storage & Distribution supplied its more than 50 restaurants throughout Tampa, Fla., until two years ago when it made a strategic business move to cease its McDonalds’ distribution and provide third-party logistics for other companies. “We were outgrowing our building and it was suggested to us that we dabble in cold storage because we purchased so much property,” Executive Vice President Kim Seigler says. “We started looking into cold storage and realized there weren’t many of them being built here and the ones that do exist are fairly old.”

Although Caspers Company still owns 64 McDonald’s locations, the company decided to sell its distribution rights to the restaurants after determining there was no growth avenue. The company was one of two owner-operated McDonald’s distributor centers in the United States. “Gartner ranks the entire McDonald’s distribution system as the second-best logistics company, so the preparation we had was invaluable,” Seigler says. “McDonald’s is very progressive in its logistics and that in itself helped us transition to the outside.” 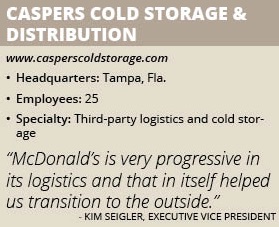 Today, Caspers Cold Storage & Distribution is focused on cold storage and distribution for other companies, which it expects to will have enormous growth potential. With its new approach to business, Caspers Cold Storage & Distribution in November 2017 opened a 115,000-square-foot state-of-the-art facility in Tampa to meet the needs of its new customers. “Our business model is being spread by word-of-mouth and amongst previous contacts who we knew needed storage in the area,” Seigler says. “With our state-of-the-art system, we can guarantee cold temperatures all the time.”

Caspers Cold Storage & Distribution facility is equipped with a cascade or low-charge packaged refrigeration system, which requires a combination of low-charge ammonia and CO2 refrigeration. “The blast freezers allow for quick freezing and maintaining low temperatures down to -49 F with a wind speed of more than 28 mph inside the cells so it freezes quicker than a normal ammonia system,” Seigler explains. “We have customers that their products require blast freezing.”

Designed by Stellar, a design, contracting, engineering, fabrication and installation services company for industrial refrigeration based in Jacksonville, Fla., Caspers Cold Storage & Distribution’s facility includes a main freezer room and two blast freezers. “Stellar did the whole design and refrigeration of the building, built it offsite and trucked it in and installed it onsite within two weeks,” Seigler notes.

Caspers Cold Storage & Distribution says the technology has been around for a while, but it is just starting to get implemented. The facility’s engine room consists of two packaged ammonia refrigeration systems, which delivers ammonia to a -10 F freezer cooled by two separate units and a 35 F dock area that is cooled by six low-charge DX ammonia evaporators.

The ammonia charge of the system is about 5,500 pounds and the CO2 charge is about 3,000 pounds. “It reduces the amount of ammonia onsite because once you hit 10,000 pounds of ammonia on site, you come under more regulations,” Seigler notes. “It’s expensive to build, but it allows us to run more efficient and keeps us under 10,000 pounds.”

Caspers Cold Storage & Distribution facility features “drive-thru” docks, designed and installed by Milwaukee-based Arbon Equipment. Trucks pull up to the dock that feature the latest roll-up doors that open on the inside, rather than opening up to the elements outside. “The dock doors increase efficiency and product integrity so the trailer is never exposed to the outdoor environment,” Seigler explains. “We use our trucks to supplement the cold storage business and ELDs, so customers can track the trucks.

“We are set up to be as efficient as possible, even at our docks. The driver is assigned a door, gets a red light and as soon as he’s done being loaded he gets a green light,” he continues. “The driver doesn’t have to get out of the truck other than to check in and get paperwork. The docks are fully automated. The dock doors can’t open until the truck is locked in and the plates can’t go down until the door is open, so there’s a number of safety measures in place.”

In addition to its refrigeration and dock systems, Caspers Cold Storage & Distribution uses Datex FootPrint, a state-of-the-art warehouse management system to also increase efficiency. The facility is equipped with LED lighting and each light is motion-activated.

Caspers Cold Storage & Distribution is adjusting to the world outside of McDonald’s distribution, and Seigler admits there are a few challenges. “With McDonald’s distribution, everything was neat and on-time, whereas with the general population, you’re lucky if the truck meets the pick-up time and day,” Seigler says. “With the driver shortage and ELD mandates, schedules are hard to keep for other transportation companies.”

To combat this, Caspers Cold Storage & Distribution is looking to bring the “Caspers Service Model” to the industry. “If companies are prepared to keep their drivers rolling, we do our best to get them loaded and unloaded within an hour,” Seigler says. “We are very flexible, understand the industry and know appointments are made to be broken. We are trying to bring the fast service that McDonald’s expects to the industry.”

As the transportation industry continues to get more challenging, Seigler believes that if more facilities catered to the driver like Caspers Cold Storage & Distribution facility does, it could lessen the driver shortage “tremendously.” “We stay focused on the dock, take appointments and ask for appointments, but understand there are circumstances in which that can’t always be met,” he explains. “Just like when you walk into McDonald’s and expect fast service, drivers should expect fast service and to be treated with respect.”

Drivers are often seen as the lowest man on the totem pole, Seigler says, but they deserve respect. “We have our own drivers and we treat every driver like we would want our own drivers to be treated,” he adds. “A lot of the drivers are independent, so their livelihoods depend on them getting loads and delivering loads. At Caspers, we get you loaded and unloaded as soon as physically possible.”

When the new facility was built, Caspers Cold Storage & Distribution expected it to be a destination warehouse for product coming in from out of state to supply the large distribution companies in the area. However, “it’s turning out to be a more manufacturing-based warehouse, storing product that’s been manufactured that goes out of state,” Seigler explains. “That’s been an eye-opener.”

The company continues to adapt to its new customer base and their requirements. “That’s been the biggest eye-opener because each customer, of course, has their own set of rules on how they want their product handled,” Seigler adds. “For example, we built out this property and already have been contacted by one of our customers who has an interest to build more. We are not ready to do that and have to get this facility full first, which we expect will be by the end of the year, and then we’ll see.”