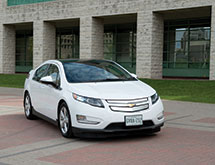 Canada’s capital, the city of Ottawa, Ontario, needs reliable vehicles to help life in the municipality to continue to run smoothly. Fortunately, it has its Fleet Services Branch to help maintain that balance.

Manager of Fleet Acquisitions and Technical Assistance Luke Senecal says the branch maintains approximately 3,500 vehicles and pieces of equipment for the city. “We support the groups within the city who are delivering services to the public,” he states.

The branch is made up of three divisions, which are Fleet Maintenance, Lifecycle and Safety, as well as Supply Chain and Training. The branch’s reach does not include transit, but it does maintain Ottawa’s municipal vehicles in support of operations such as fire, paramedics, roads, traffic,  water and wastewater, etc.

“All of those departments … are relying on us to provide them with reliable vehicles,” he says. “That’s our main focus within fleet services – service excellence for our clients.”

The Fleet Services Branch has successfully implemented sustainable initiatives with its Municipal Green Fleet Plan. Senecal notes that its initiatives have earned it  multiple honors, including the 2012 Sustainable Fleet Award from the National Association of Fleet Administrators.

Through the program, the branch has received $500,000 per year for the past several years from the city council for uses such as acquiring new hybrid vehicles. Currently, the city has 42 hybrids in its fleet, including Ford Escapes, Honda Civics and a Toyota Camry assigned to Ottawa Mayor Jim Watson.

The branch recently ordered 13 more, Senecal says. “In the next several months, we’ll be able to say we have 55 hybrids in service,” he says.

The funds also allow the branch to invest in anti-idling technology, including Espar heaters in its ambulances. During cold weather in Ottawa, Senecal explains, medications have a tendency to freeze, and if that happens, the meds can no longer be used for patients and must be replaced.

The heaters were the perfect solution to provide heat to the cabin of the ambulances while eliminating the need to idle the engine for heating purposes. This saves fuel and reduces GHG emissions. Thanks to the program, “We’ve installed Espar heaters in all 76 ambulances,” Senecal says. “[They] provide the warmth [that is] required for the medications.”

The city also has invested in electric vehicles. In September 2011, “We were the first municipality in Canada to get the Chevy Volt,” he says, adding that its fleet also includes four electric ice re-surfacers.

As a direct result of the plan, the Fleet Services Branch  reduced its fuel use by 96,000 liters in 2012. While it lowered its greenhouse gas emissions by 179 tons that year, it increased that number to 203 tons in 2013.

In recent years, Ottawa City Council also has increased the capital dollars allocated to the Fleet Services Branch for  the replacement of old vehicles. Every year, “We’re essentially putting 200 new vehicles on the road and removing 200 older vehicles,” Senecal says.

“That sheer fact alone is having a positive impact on the environmental aspects,” he says. “[We’re] putting a new vehicle on the road [that meets] the current emission standards.”

The Fleet Services Branch is continuing to explore new initiatives, including a driving simulator, Senecal says. “We’d have the simulator that could be used to help promote an eco-driving [type of behavior],” he adds.

Driver behavior does have an impact on fuel consumption; for instance, “If you reduce your speed, obviously, you’re reducing fuel [use],” he says.

The branch is also testing more anti-idling systems on ambulances. “Those are our next upcoming green initiatives, in addition to acquiring more hybrids,” he says.