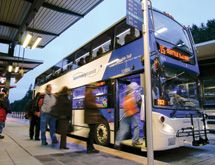 Although they might sound like a really big cup of coffee, “double talls” are enclosed double-decker buses and just another example of how Snohomish County’s Community Transit is doubling up on customer service as it expands to serve a growing population near the bustling technology center of Seattle. “Las Vegas was first with double talls on the strip – we were the second, and I think that’s in the country,” Community Transit CEO Joyce Eleanor maintains. The agency’s fleet of 23 double talls are used on commuter service between Snohomish County and Seattle.

“We can carry as many as 100 people on one bus,” Eleanor declares. “Many of these are standing, but they seat about 77 passengers. An articulated bus seats about 60.” Double talls’ shorter length improves turning ratios and maneuverability as well as taking up less space in the transit agency’s parking facilities. “They take up less space on our freeway, which is important because our freeway is horribly congested,” Eleanor maintains.

Another innovation used by Community Transit is a 400-van fleet operated by the passengers themselves. Groups of eight to 15 people going to the same area can reserve the use of a van. One of the people and a back-up passenger are trained in defensive driving and other skills – which is required by insurance companies – and another passenger is trained to be the pool’s bookkeeper.

“The bookkeeper collects all the fares of the people in the van pool and sends them to us,” Eleanor notes. “So it’s a very effective service, because we don’t have to pay a driver. We provide the van that the people use, and we also do the maintenance on the van and pay for the fuel. In order to entice someone to want to be a driver, they get a certain number of miles for personal use – not a great deal, but just a little extra so we can get drivers.”

Community Transit’s vans can help employers with more than 100 workers who are required by the state of Washington to encourage alternate forms of transportation. The agency has a division that helps employers meet this requirement by forming van pools.

A Whale of a Card

Community Transit participates in the region’s Orca smart card program, which can be used on the transit systems of King, Pierce, Kitsap and Snohomish counties. “People love it because we have seven different systems in the program,” Eleanor explains. “So if you’re going on a long trip that involves more than one transit system, you can use your Orca card and also use it on the ferry system.”

Swift, another agency program, uses express buses in business-access-and-transit only lanes. “The only cars that are able to get into the bus lane are those turning into a business,” Eleanor says. Swift has dedicated stations where its fare tickets are sold, and the only other fare accepted on Swift buses is the Orca card.

Faced with cutbacks in state and federal funds, Community Transit evaluated passenger usage data, maintained its heavily used routes, cut frequency on less-traveled routes and cut Sunday and holiday service to save overhead. Despite a 37 percent service reduction, 2012 ridership was down less than 6 percent, Eleanor says. The agency has learned to do more with the same amount of funding it had in 2000 – it now is carrying 26 percent more people per hour than it did then, she says.

“One thing I am absolutely consumed about is the quality of our service,” Eleanor emphasizes. “Even when we cut service, we’re going to be a smaller agency, but we’re going to have the same quality. Our customer service people take good care of our passengers. Our drivers are incredible.”