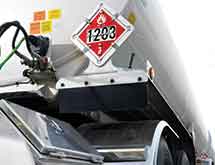 Although it does most of its trucking for its owner, Murphy Energy, Connect Transport still has to make a profit. “In the beginning, there was less pressure to be profitable, since we were more of a service company for Murphy Energy,” Connect Transport Director of Human Resources and Safety Heather Niccum concedes. “But now that we’ve become a bigger company, there’s more of a push for us to turn a profit.”

Founded in 2008, Connect Transport’s primary customer is Murphy Energy, but it does third-party hauling for other companies. “We’re constantly looking for ways we can be profitable,” Niccum emphasizes. “In the trucking industry, you have so many fixed costs – drivers, trucks, fuel, insurance and regulatory cost – and there’s not really anything you can do about those.”

To save drivers’ time, Connect Transport locates its in-house mechanics in a variety of locations so drivers do not have to take their trucks in for maintenance and be paid while they wait for the service to be done. The company also is communicating with its trucks through the email that is included with the PeopleNet units in each truck instead of through cell phones, which were used infrequently.

“We’re always looking for things that really help the drivers and make their time more efficient,” Niccum emphasizes. “Our crude oil drivers use an electronic ticketing system, and we are looking at a similar system to add to most of our fleet of NGL trucks. If we can get those guys away from having to do handwritten tickets, we are hoping to get better production out of them and make it easier for our back-office people, who have to process all that paperwork.”

Approximately 65 percent of Connect Transport’s shipments are of crude oil, and the rest is natural gas liquids (NGL). The company has terminals in Texas, Oklahoma, Tennessee, Louisiana and Mississippi. Its fleet is approximately 185 tractors and 200 soft-shell and hard-shell tankers. The hard-shell tankers are pressurized to haul natural gas liquids, and they are nearly 40 percent of the tanker fleet.

To ease maintenance costs and parts inventories, most of the tractors are Peterbilt. The company also has been buying partially rebuilt tractors called gliders. “It’s a brand-new truck, but it has a pre-emissions rebuilt motor put into it,” Niccum says. Older motors are exempt from the latest emissions regulations.

“We had increased downtime of the equipment and our drivers, thus making us very inefficient,” she continues. “By switching to glider kits, you get rid of those emission-related issues. We’ve had fewer problems and less downtime from these units compared to our other trucks. We’re really hoping to get better gas mileage, less downtime overall and be more productive with those units.”

If you are going to truck oil, you need a place to store it and sell it. “Murphy Energy owns anywhere from eight to 12 400-barrel atmospheric tanks at approximately eight crude stations that are connected to pipelines in Oklahoma,” Niccum says. “We sell through the pipelines a majority of the time.” Crude oil may only be in the tanks for a day or two before it is piped out and replaced with new crude.  In Texas, it is hauled into different facilities. NGLs are primarily taken to Murphy Energy’s two facilities located in Kingfisher, Okla., and Jackson, La.

Connect Transport has several methods of retaining drivers. “I think offering a good salary, safety bonuses and being a great company to work for – that goes a long way,” Niccum says. “We really listen to employees, and most of our employees would say more so than other places they have been employed. It’s not uncommon to have one of the half-owners at a safety meeting talking face-to-face with a driver. The drivers get a lot out of that and see it as a chance to be heard by someone who matters.”