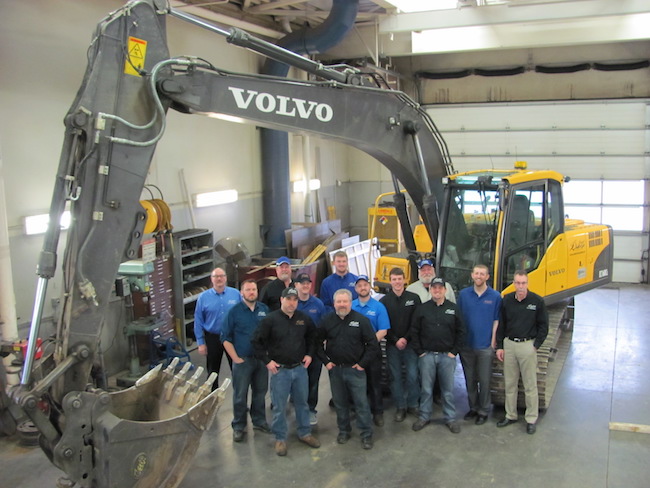 The Dakota County Fleet Management Department continues to find ways to improve its operations and save taxpayers money.

The Dakota County Fleet Management Department’s ability to maintain hundreds of vehicle and pieces of equipment while keeping costs low for county taxpayers has earned it the recognition of its peers several times since it was formed in 2007.

“We constantly look for new ways to improve our service to taxpayers and the different user groups we serve,” says Kevin L. Schlangen CPFP, CAFM, CEM, fleet manager for the Rosemount, Minn.-headquartered department. “The awards we’ve won are all centered around what we’re doing to increase the efficiency in how we provide fleet services; that’s what we excel at.” 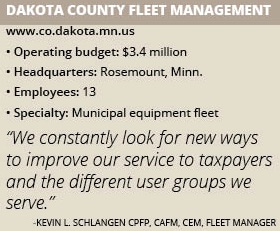 The department was created in 2007 following the consolidation of all of the county’s equipment maintenance and management efforts into a single entity. Before the merger, each of the county’s departments – including public works and the sheriff’s office – had its own equipment budget and maintained equipment at different sites with their own staff. The department oversees 687 pieces of equipment with a total value of $23 million.

Since its inception, Dakota County Fleet Management has saved taxpayers $3.04 million by implementing a formal capital replacement program that includes reducing and right-sizing its fleet as well as securing grant funding for new equipment. The program assigns a point value to equipment to determine its replacement priority. Points are based on age, mileage or hours, type of service, reliability, condition, maintenance and repair costs, and energy efficiency of replacement units.

The county has reduced the size of its fleet by 125 pieces in the last nine years. The cost to replace those pieces is $2.7 million, Schlangen notes.

During the same time, Dakota County Fleet Management has added 82 pieces of equipment. Roughly $1.6 million – or 64 percent – of the $2.5 million total cost of that equipment was paid through grants or through non-tax related programs.

“We have partnered with other groups and tapped into alternative funding sources to meet the needs of our customers,” Schlangen says. These include grant programs and partnerships with local agencies or municipalities  including the Minnesota Department of Natural Resources and the Department of Homeland Security.

The equipment replacement effort allowed the county to increase the average mileage use of its vehicles. Before the point system, all squad cars were typically replaced at 90,000 miles; now, cars run up to 150,000 miles, the county notes.

Every piece of on-the-road equipment in Dakota County – 280 units in total including law enforcement and public works vehicles – is equipped with telematics systems. Supervisors and other country personnel were trained extensively in the value of the devices and use of the reporting functions.

“Through this program, we have improved driver behavior, increased our fuel economy, increased utilization and extended the useful life of our equipment,” Schlangen says.

The Dakota County Fleet Management Department is mindful of its impact on the environment. The department is accredited through the NAFA Fleet Management Association’s Sustainable Fleet Accreditation Program, which notes its efforts to improve its overall energy and fuel efficiency.

In recent years, the department has added flexible-fuel and hybrid vehicles to its fleet, used grant funds to install catalyst devices on vehicles to reduce diesel emissions, and converted strobe lights and arrow boards to LED lights.

“Since 2005, we’ve reduced our greenhouse gas footprint by 34 percent through a combination of different programs,” Schlangen says. “There’s not one silver bullet to sustainability; every year we keep building on what we’ve done.”

The department continues to train its staff on the latest developments in its industry. “We are working on educating ourselves to keep up with changes in technology so we can remain competitive with the shop across the street,” he adds, noting the department provides fleet services that are constantly being compared to the private sector in cost analysis.

The Dakota County Fleet Management Department’s plans for the near future include looking at ways to manage the six fuel islands it maintains. In addition to fueling its own vehicles, the department also sells fuel to outside agencies.

Schlangen says he is proud the county has improved its fleet management practices and invested in equipment while maintaining a relatively flat budget for the past 10 years. “When you consider how the cost of pretty much everything has gone up during that time, it says a lot about our programs that we’ve been able to hold our own with 0 to 2 percent changes in our budget each year,” he says.