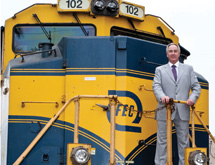 As the exclusive rail provider to many of South Florida’s ports, Florida East Coast (FEC) Railway is the only rail system that can offer service along the eastern coastline of Florida. “FEC provides end-to-end intermodal solutions to customers that demand more cost-effective options without compromising service quality,” says Jim Hertwig, who has served as president and CEO of FEC since July 2010 and boasts 40 years of freight transportation experience. “The scheduled railroad service combines on-time performance with cost-competitive rates. In addition to rail, FEC Highway Services provides drayage operations allowing truck-like service to the markets it serves.”

FEC is a 351-mile freight rail system located along the east coast of Florida. An affiliated company of the FEC is building a  distribution, transloading and warehousing center adjacent to FEC’s Hialeah yard in Miami. FEC is partnering with Port Miami to build an on-dock rail facility and Port Everglades in Fort Lauderdale, Fla., to build a near-dock rail facility to provide faster and more cost-effective service to intermodal customers. The interchange with two Class I railroads in Jacksonville, Fla., enables a vital link between FEC and the nation’s rail network.

FEC transported 348,000 intermodal shipments in 2012, which accounts for approximately 77 percent of its rail traffic. “FEC is the most direct route between Jacksonville and South Florida,” Hertwig says. “FEC offers the best on-time scheduled service and exclusive service to Port Miami, Port of Palm Beach and Port Everglades.”

FEC is involved with a number of projects that will enhance its services and expand its capabilities. The railway has partnered with Port Miami to implement on-dock rail service. This will make FEC the only railroad with direct access to the port, because trains will be run directly from the port to the FEC mainline.

The Port Miami on-dock rail project is slated to be completed by the end of 2013 at a cost of between $45 million and $50 million. FEC has contributed $9 million for the project, with the rest of the funding coming from the federal TIGER II grant ($23 million), the Florida Department of Transportation ($9 million) and Miami Dade County ($5 million).

Hertwig says the key benefit of this project is that it will take countless trucks off the highway and relieve some of the notorious traffic congestion that plagues Florida’s highways. “In the second half of 2013, we’ll have containers loaded directly onto railcars from Port Miami, and then move them to our railroad,” he says.

At Port Everglades, a new $73 million Intermodal Container Transfer Facility will occupy 42 acres in Broward County, Fla. This facility will combine international and domestic cargo for better service to inland destinations. FEC contributed $35 million in funding to get this project off the ground, according to Hertwig.

“This is so unique,” Hertwig adds. “At that facility, we can load a 53-foot domestic container with a 40-foot International container all going to southeastern cities such as Charlotte [N.C.], and that train block will be built directly out of this terminal facility.”

The rail projects are just one part of the expansion of Port Miami and Port Everglades.  Both of these Florida ports have capital projects to expand their capabilities to handle additional freight.  These Ports and FEC are getting ready for the expected growth when the new Panama Canal is completed.