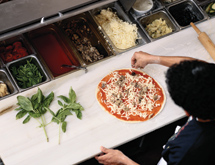 Folks who visited the original Fox’s Den Pizzas 40 years ago will find many of the same things today. The family owned and operated company still makes authentic Italian pizzas using hand-tossed dough topped with a proprietary and award-winning pizza sauce. Among its ingredients, the company still boasts San Marzano-style grown tomatoes, and a freshly grated Italian Pecorino Romano cheese from the rugged Apennine mountains of Central Italy blended with a special grade of Italian extra virgin olive oil. When it comes to the menu, the same standards set decades ago remains today. In fact, the only major thing about the company that has changed is its size.

Fox’s Den Pizza has 300 franchises located across the country. When it comes to its transportation, distribution and logistics, the company uses a mix of in-house personnel and third-party partners to get ingredients to the right locations at the right times. General Manager Jeff Holsing says the company’s growth has caused some shifts in the corporate infrastructure

“We have grown in the number of stores we serve,” Holsing says. “When I started here we had three trucks and we have eight now. The number of items we handled was around 100 and now we have around 400 different items. We’re always growing our locations all throughout the United States.”

Fox’s Den Pizza directly manages the transportation and logistics operations for 140 of its 300 locations. The Pennsylvania-based company handles a 200-mile radius encompassing Pennsylvania, Ohio, West Virginia, Virginia and Maryland. With a 35,000-square-foot warehouse, seven GMC 20-foot refrigerated trucks and a 24-foot freightliner, Fox’s Den has invested in the space and equipment to keep up with its growing family of franchises.

It also has a dedicated workforce. Holsing started with the company in 1987 as a driver and worked his way up to general manager. Many of the drivers have been with the company 15 to 20 years.

“Most of the guys we have have been with us a very long time,” Holsing says. “We have very little turnover for our drivers.”

Equipped for the Job

Fox’s Den Pizza focuses on retaining drivers and instead replaces its trucks. A contracted mechanic works on the trucks at evening and on the weekends but the company still turns over its entire fleet every four years. The company hangs on to the two trucks that are in the best condition from the previous fleet. Having two quality spares on hand minimizes downtime in case of breakdowns in its main fleet.

In addition to minimizing downtime, the company simultaneously focuses on optimizing its routing system. With each new store, Fox’s Den Pizza plans out the best route that requires the least traveling distance and time, thereby reducing fuel costs. Holsing says that recent regulations have posed new challenges to its routing system.

“The government has regulated the number of hours that drivers can be on the road,” he says. “Because of the downtime that’s now needed, we had to readjust the hours of the drivers and readjust our routes because all of the drivers have to go out and be back in one day. We’ve had to rearrange things to stay within those limits, that’s probably the biggest challenge we’ve faced. We have dealt with it quite well for the most part. We only have one truck on the road that has to stop overnight a couple of times a week because of the distance he has to drive.”

The majority of locations beyond corporate’s 200-mile radius are served by Performance Food Group (PFG). Fox’s Den Pizza has worked with PFG for the last four years and Holsing says the third-party distributor has become an extension of its own operation.

“It’s been working out very well and the more time that passes by, the better they have gotten at working with us and handling the product for our stores,” Holsing explains. “They’ve been much easier to work with than some of our past partners. They accept new products much easier. Before, if we wanted to serve a new product in the stores, it was a battle with other companies. PFG carries a huge inventory and they already have large portion of the items we stock, but if we bring on any proprietary items, they will stock it with no complaints.”