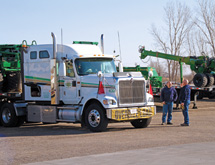 For more than 30 years, Great Plains Trucking has been one of the most reliable and trusted flatbed trucking companies in North America, serving customers in its home region of the Midwest and beyond. President Brett Weis says there are many reasons why the company has become the success story it has, not the least of which is its overwhelming commitment to customer service. In a highly competitive marketplace, Great Plains Trucking has more than enough on its side to stand out among the crowd, he says.

The Kansas-based company is a subsidiary of agricultural equipment manufacturer Great Plains Manufacturing. Great Plains Trucking was established in 1981 to haul equipment and raw materials for its parent company. “When we started out, we were set up as a private carrier and we had just five trucks at the beginning,” Weis says.

However, about 20 years ago Great Plains Manufacturing decided to operate Great Plains Trucking as a common carrier. This opened the doors for the company to haul for many local manufacturers as well as the parent company. Over time, Great Plains Trucking expanded its services to provide flatbed hauling for customers. “We haul some flatbed products for different shippers here in town who manufacture some different products,” Weis says, adding that these include lumber, rolled steel, raw and finished steel.

Weis describes the flatbed market as “fierce” and “very competitive,” and he believes the best way to ensure profitability is to push for greater efficiency throughout the entire operation. “Everybody’s out there looking for a better way to skin a cat,” he says.

Great Plains Trucking has used technology to drive greater efficiencies in everything it does. Weis says it was one of the first carriers to utilize satellite communications technology in its trucks, and this continues to provide the company with a significant edge today. With satellite-based tracking, both Great Plains Trucking and the customer know precisely where their load is at all times, and drivers can be made aware of any detours or delays before they encounter them.

Each of the trucks also is equipped with a touchscreen computer that provides drivers with applications specially designed to help them track hours of service, get turn-by-turn directions and monitor engine performance. Weis says management also has access to this information at all times, and can use it to evaluate each driver based on the truck’s performance statistics. Drivers who meet or exceed the company’s efficiency standards receive performance bonuses, Weis adds.

Weis says these in-cab computers have been the single-biggest changes to affect the company and the industry in recent years, and the impact has been positive.

Although adding this technology to all of its trucks required a bit of an adjustment for drivers and customers, Weis says Great Plains Trucking’s customers have come to rely on the up-to-the-second information it provides them.

As important as the company’s technological advantage is, Great Plains Trucking wouldn’t be as successful without the strong emphasis on customer service it has developed over the years. Weis says the company’s aim is to treat each customer “like royalty,” and that attitude begins with doing the same for its employees. “From our owner on down, we believe that each employee must be treated exactly how you would want to be treated,” he says.

In the near future, Great Plains Trucking will be focused on developing new ways to expand its business. Specifically, Weis says, the company wants to expand the brokerage it has run out of its office.

No matter how the company expands, Weis says, Great Plains Trucking will rely on the foundation that has carried it so far. “We’ve got good equipment and trained drivers, and we want to take advantage of that,” he says.