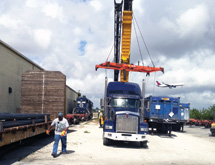 Building a better bottom line isn’t just about getting revenue in, it’s also about reducing spending going out. So for companies that base their business around transporting, picking up new business only makes sense when the revenue coming in is greater than the investment going out. It’s simple mathematics but in a world of ever-increasing costs, companies have to get a little more innovative so the numbers add up.

“One of our executives here says that when the company started, freight was two percent of the company’s overall cost,” says Dean DeSantis, executive vice president of Heritage Environmental, a hazardous waste disposal company. “Looking over our 2012 record, the freight cost is rapidly approaching 25 percent of our costs. It’s getting very expensive.”

Heritage Environmental is truly a national company, operating a variety of disposal sites, landfills and incinerators at 14 U.S. locations and one location in Puerto Rico. But depending on the type, waste from a remediation project in one area may need to be transported out of state, creating a logistical puzzle where Heritage needs to figure out the lowest-cost means of transportation. Prior to 2005, trucking was the main option, limiting the types of projects Heritage Environmental could take on. However, the company embarked on a project eight years ago that has paid off dividends today.

Working with the Railroad

“In 2005, we kicked off a new department called Strategic Project Group,” DeSantis says. “We bought rail cars and intermodal boxes. Today we operate 165 cars and 1,200 containers.  We have a fairly sizeable tank fleet to move bulk liquids by rail. Rail is typically 30 percent lower than trucking costs.”

Adding rail to its portfolio was spurred by a large chrome remediation project in New Jersey. The state was encumbered by land laden with chrome residuals, with some sites reaching up to 1 million tons of chrome residuals. Heritage Environmental knew it had the capacity to safely process the waste in its Indianapolis plant, but when it came to bidding, the cost to truck the waste from New Jersey to Indiana  put the company at a disadvantage against other competition. But, if the waste could be transported via rail, that would put Heritage Environmental on equal playing ground.

“We sold the idea to our stakeholders, who authorized the capital to go buy equipment,” DeSantis explains. “We spent $2 to $4 million on equipment and infrastructure needs after successfully winning the first job in October 2005. The job took four to five months to complete and the stakeholders gave us the authority to continue bidding on waste disposal projects utilizing rail. Since then, we’ve spent another $2 to $4 million on improving our rail equipment and infrastructure.”

The investment has allowed the company to efficiently complete a number of high-volume jobs in New York, Massachusetts, Rhode Island and North Carolina, to name a few. But in the name of progress, Heritage Environmental is again looking at ways to reduce its logistics costs and DeSantis says the solution lies in one of the oldest forms of transportation.

“What’s transpired in the last eight to 10 years,  railroads –  though they’ve been good partners to Heritage – they have continued to ratchet up pricing to the point where they are just south of trucking prices,” DeSantis explains. “When I think about the transportation needs as our country grows, outside of the waste business, we have to look back to all navigable waterways. These were once a major mode of transportation.”

Just as rail transportation offered a 30 percent cost reduction versus trucking, marine barging can be a 30 percent cost reduction over rail, according to DeSantis. It’s an option the company is looking at now and is an initiative DeSantis says the company would like to launch within the next five years. Heritage Environmental is in the early parts of conceptual strategy – where and how to build future facilities and port infrastructure to get the most out of this reemerging concept.

The marine means of transportation isn’t without its limits, though. There are certain types of waste that are prohibited on waterways just as certain types of waste aren’t allowed on rail cars. But where the option is safe, legal and cost efficient to ship by barge, Heritage Environmental wants to be in a position to take advantage of it.

“It’s an all-encompassing strategy,” DeSantis explains. “Some goods and products are forbidden to move by rail, others are time-sensitive, therefore barge wouldn’t always make sense. I would say that 80 percent of our customers’ wastes could be shipped by rail, but rarely does it due to the small shipping  volumes. We want to be dynamic, move, mix, and match the right job with the right modality. Trucking is still a big part of what we do. We have 212 trucks and 202 qualified drivers. But looking into the future, rail and marine have to play a strong role in what we do.”