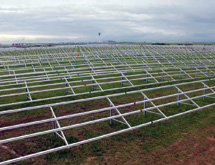 Home to the second-largest global operation for FedEx Express, Indianapolis International Airport (IAA) maintained relatively high margins during the worst years of the Great Recession. However, like countless other U.S. airports, the airport’s leisure travel revenues declined as the economy came to a standstill, and that stream has been slow to return to normalcy.

However, the IAA has launched numerous non-airline projects currently under construction and in the pipeline to maintain a solid financial footing in both good times and bad.

According to Michael Huber, senior director of commercial enterprise for the IAA, the authority had to act quickly since a new, huge terminal had been completed shortly before air travel demand cratered amid a global recession and was exacerbated by the effects of industry consolidation.

“There’s no question that the industry has been hit hard, especially since 2008,” Huber says. “What that led us to do is try to be much more creative or innovative in how we utilize assets and in how we’ve grown non-airline revenue.”

One such project focuses on providing renewable solar power for the city of Indianapolis. The authority is delivering a solar farm on the southwest portion of the airport’s campus that will help power the grid for Indianapolis Power and Light.

The first phase of the project, scheduled for completion in August, will have capacity to generate 10 megawatts of electricity. Phase 2 will generate an additional 7.5 megawatts, and both phases will be built on adjacent 70-acre sites.

According to Huber, once completed, the solar farm at Indianapolis International Airport will be the largest such installation at an airport in the United States. “Not only does this help power the grid for Indianapolis Power and Light, but it generates energy from a green source and is a great revenue generator for the airport,” Huber adds.

Another project under way at Indianapolis International Airport is the demolition of the old terminal, which is a few miles east of the Midfield Terminal that opened in 2008. This terminal runs along Interstate 465 near junctions with interstates 70 and 74 and was operational for 40 years before the authority deemed the airport needed a modernized structure.

The authority decided to expedite the demolition of this terminal after receiving feedback from developers who weren’t interested in new projects on the site as long as this structure remained in place. That’s because this wasn’t a simple demolition job – it required asbestos removal and environmental remediation, as well, which add time to the schedule of any new development.

Instead, the authority has joined forces with the state of Indiana and the city of Indianapolis to attract aviation companies. The $5.7 million investment the IAA is making in the demolition will create a development-ready tract of land desirable for aviation-related businesses.

“Right now, the airport authority wants to attract a company that would be an aviation or manufacturing or technology company that would have a use for runway assets,” says Carlo Bertolini, director of marketing and public relations for the IAA. “There’s no deal yet, but we’ve seen some potential interest in the site.”

Another project for Indianapolis International Airport is a series of parking initiatives. According to Huber, parking is the largest source of non-airline revenue for most airports, and this June, the airport rolled out its parkIND program.

This program is a series of new services for the public and its parking needs. One is designed to reward frequent travelers for their loyalty. These customers can accumulate and quickly build up points toward free parking. The airport also features a top-tier status in the program that provides access to a special lane offering expedited access to TSA checkpoints.

Huber says the airport is installing monitors to tell those who use the economy lot when the next bus will arrive. Also, the airport is developing a smartphone app so parkers can monitor where those same buses are located as they wait.

“I’ve been here nine months, and I’ve seen how they’ve spent so much time on parking here in airports, which makes sense given the revenues,” Huber adds. “If we can provide a better customer experience, we can increase margins for parking.”