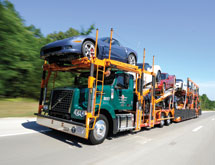 Some companies focus only on short-term results, but not Jack Cooper Holdings. Instead, owner and Chairman Mike Riggs says that Jack Cooper plans for the long term with every business decision it makes, under a directive known as “The Zoe Strategy.” It is a company wide mandate.

Riggs explains that “Zoe” is his five-year-old granddaughter, who he hopes will join the Jack Cooper team someday. To ensure it is a healthy business when that day comes, the company avoids making short-term-based decisions. Instead, “We want to make decisions for the long term – for an enduring, generational company, where we still have family control – when Zoe is in the workforce. When you make business decisions for a 20-year timeline, you make very different decisions,” he declares.

Jack Cooper provides automobile delivery via truck, plus all sorts of finished vehicle transportation and logistics services, to almost all of the major domestic and foreign auto manufacturers and commercial shippers of new and pre-owned vehicles. Founder Jack Cooper started the company in 1928, as a carrier for General Motors from the Leeds Assembly Plant in Kansas City, Mo. Riggs acquired the company in the summer of 2009.

Over the years, the company grew through the acquisition of numerous competitors. In 2009, it became the one of the largest auto and truck transport carriers in the nation when it was acquired by Active Transportation Co., which Riggs owned. In December of 2013, Jack Cooper Holdings acquired the assets of Allied Holdings out of bankruptcy, making Jack Cooper Holdings and its 4,000 truck fleet the largest auto carrier in North America, serving the U.S., Canada and (soon to come) the Mexican markets.

Although the auto industry was suffering from the “Great Auto Recession” back in 2009, when auto sales fell almost in half, Riggs and his team pulled off a very successful financial turnaround. “Over the last four years, we’ve had quite a remarkable run,” he says. “We have a reasonable shot of achieving $1 billion in revenue in 2014 and at record margins; despite the fact that the auto industry has not yet fully recovered.”

Riggs credits the success to the team approach: management and drivers – all striving to be the best of the best. “We have a truly great team.”

Today, Riggs and his children own 71 percent of the company, with the balance being owned mostly by approximately 20 key executives of Jack Cooper Holdings. This ownership helped lead to Jack Cooper setting a record level of earnings despite being in a down industry. “So we feel like we’re really well positioned to perform even better over the next four years as the automobile industry continues to return to more normal (higher and more stable) levels of production.”

Jack Cooper serves clients in the United States and Canada with a fleet of 4,000 trucks and a team of over 4,000 employees – and that number grows every day. “We hope to expand into Mexico in the next 12 to 18 months in a pretty big way,” he says. Riggs explains many customers have asked Jack Cooper to begin operating below the border, and the company is positioning itself to make that strategic move a reality.

Jack Cooper has implemented state-of-the-art technologies. “We totally changed from the old ways,” Riggs says, noting that its trucks are tracked by GPS using small iPad type tablets. These tablets also allow for automating log books, communicating with drivers, taking photos for any damages and staying in contact with terminals.

Riggs compares the company’s terminal workers to air traffic controllers. “The drivers are in hundreds or thousands of locations and the terminals are trying to think about what’s the best route in an optimized network,” Riggs says. “They have to factor in road conditions, shortest routes, possible back hauls, best fuel pricing, mandated customer time lines, optimal load factor, along with hours of service laws just like airlines must consider pilot hours.

“We have many of those same kinds of variables that an airline has, so the new tablet technology is a real competitive edge,” Riggs says. “In fact, our company is trying now to work with optimization specialists from diverse places such as India and the Massachusetts Institute of Technology – all to make our drivers more efficient. That’s one of our major initiatives.”

Its iPad-style tablets can allow drivers to take pictures of damages with a geo-time stamp, for vastly improved record keeping and customer satisfaction. “It’s like we went from the 1960s to 2014 overnight,” he says.

Riggs is proud of his entire team at Jack Cooper. “There’s no dispute about this,” he declares. “We’ve got the best drivers and the best management team in the business.”

Along with providing good pay and great health insurance, “We have a very liberal pension plan, too, which is comforting to all drivers,” he says. “It makes for a pretty stable workforce.”

Riggs says Jack Cooper will not only stay focused on the Zoe strategy, but is also developing the “Sofia Strategy,” which is named after a second grandchild. But this strategy, he explains, is a focus on diversification.

“One of the ways that you can [grow] is by diversifying over the next five years,” he says. “We have the entire universe of Finished Vehicle Logistics to go after. It may be inspections; or yard management; or brokerage; or shipping; or port management. A person would never put their entire 401(k) into one stock. You would want some diversification in your investment portfolio. That same diversification makes a lot of business sense for Jack Cooper. We have plenty more growth to come.”