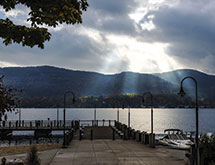 Located at the popular summer tourist hot spot of Lake George at the southeast base of the Adirondack Mountains in New York, the Lake George Steamboat Co. thrives on offering steamboat tours.

The Minne-Ha-Ha, which means “laughing waters,” is an authentic paddlewheeler, while the Lac du Saint Sacrement is the largest cruise ship on Lake George. The ships host weddings, charters, parties, sports teams, clubs, churches, camps and student special events such as proms, and can include dinners and DJs. Conventions and private parties for birthdays, anniversaries and retirements are also popular occasions for charters, the company says.

The double-decker Minne-Ha-Ha is the most popular vessel for families with its one-hour narrated tours. The Mohican has been the grand-lady of the fleet since 1908. It provides continuous passenger service, the company says. Its morning discovery cruise is the only complete tour of Lake George, also known as the “Queen of American lakes.”

The 107-foot-long, 26-foot-wide Mohican is popular for charter and business meetings. Its two propellers power it up to 15 miles per hour. It is so historic that it was elected to the National Register of Historic Places in 2008 and is one of only five such vessels in the United States so honored.

The 1,000-person-capacity Lac du Saint Sacrement was commissioned in 1989. It has three bars and a spacious dance floor. It is “the most luxurious steamship ever to ply the water of Lake George,” the company says. All of the company’s ships are renowned for providing “beautiful scenery, wonderful food and entertainment, and a staff and crew dedicated to making your cruise a lifelong memory.”

Luc Du Saint Sacrement replaced the Ticonderoga, which sailed five decades on Lake George until 1989. “During the design process, they realized she needed to be more of a dinner vessel rather than a sightseeing boat such as the Mohican or Minne-Ha-Ha,” said Bubba Dow, son of Bill, in a video interview. “The dining room is very elegant.” The climate-controlled double-deck dining room accommodates 400 people. It features buffet lunch, brunch, dinner and Thursday evening fireworks cruises. “She is very popular for charters,” Dow said. “We have about 50 or 60 charters a year because she is such a great boat for them.”

One of the biggest challenges for the company is the seasonal nature of its business. However, Lake George Steamboat Co. prides itself on its excellent customer service, fine vessels and outstanding employees, the company says.

Thirty-two miles long and three miles at its breadth, Lake George is halfway between New York City and Montreal. Inhabited by Mohawk and Iroquois, it was the site of the Battle of Lake George in 1755 during the French and Indian War, when the French built Fort Ticonderoga in the vicinity.

Situated on a rail line, Lake George became a summer playground of the wealthy in the 19th century when the Vanderbilts, Roosevelts, Rockefellers and Whitneys summered at private country estates and mansions there. By the 20th century, many of the mansions had been transformed into hotels or demolished. The area is now a popular middle-class tourist destination.

The history of the Lake George Steamboat Co. is as fascinating as the region. Its first vessel, the James Caldwell, operated from 1817 to 1821 with a unique brick smokestack. It was followed in 1824 by the 100-foot Mountaineer and then in 1850 by the 140-foot John Jay. After the Civil War, Lake George Steamboat served as transportation link for travelers en route to Canada.