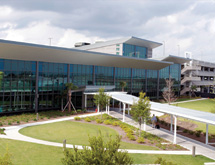 As the gateway to one of the United States’ most unique cities, the Louis Armstrong New Orleans International Airport (MSY) has to make sure it stays state-of-the-art. This goal has been the focus of two of its most recent projects, Iftikar Ahmad says.

Ahmad, the director of aviation for the New Orleans Aviation Board, says MSY recently finished a renovation budgeted at more than $300 million and will soon start the construction of a new terminal. Both, he notes, will ensure the airport has “world-class operations.”

MSY, which is located in Kenner, La., originally opened in 1946 and took its current name in 2001, in honor of the native-born musician’s 100th birthday. Today, the 1.2-million-square-foot airport serves 17,000 passengers daily. “It has 81 percent of all [airport travel] in Louisiana,” Ahmad states.

Up to Higher Standards

Both projects, Ahmad notes, were in response to local efforts to privatize the airport or move it to another location. Ultimately, “The community decided not to [do either],” Ahmad recalls. “Once those two things were gone, we were free to renovate it and start planning its future.”

The renovation project, he notes, focused on bringing the existing facility to a higher standard by updating the concourses and terminal, and expanding the lobby. “We did a lot of interior work that basically upgraded the floors, ceilings, column covers and carpets,” he says.

The airport also worked on the 2-mile-long access road to its terminal. As a result of two grants, one from the federal government and the other from the state, the airport was able to work with the other jurisdiction to overlay and restripe the existing road. The newly finished project has provided for excellent landscaping complete with long rows of rose bushes, arborvitae, oleanders and other seasonal plants.

Additionally, MSY’s contractors expanded 37 food, beverage and restaurant locations, Ahmad says. In the end, the project “was done and completed by Super Bowl 2013,” he recalls.

Before starting the renovations, MSY openly bid its contracts with contractors for the first time. “That increased our revenues,” Ahmad says.

For instance, the airport saved money with its janitorial contract, which used to be worth $4.2 million. “We openly bid and it went to $2.5 million a year,” he recalls.

Additionally, MSY lowered the cost in its security contract. “It went from $22 an hour to $12 an hour for security guards,” Ahmad says. He adds that the renovations have led to more sales in its restaurants and gift shops. “Those revenues are up by 35 percent after the work that we did.”

MSY’s new terminal, Ahmad says, is a green field construction project that will cover 648,000 square feet when finished. “People are excited about it and so are we,” he says, noting that it will make the airport more efficient.

He cited many reasons for why New Orleans decided to build a new terminal. Currently, MSY’s concourses are not connected, and each one has its own security checkpoint, which limits how far one can walk through the airport. “Transfer business cannot take place, because once you go through security, you can only [enter one] concourse,” he says.

But with the new terminal, MSY will build a consolidated security checkpoint that allows them to access all concourses, Ahmad says. Additionally, the new terminal will help the airport cope with crowds.

For example, “When a convention of 25,000 people breaks, everybody storms the airport,” he says. “How you mitigate that is to have a consolidated checkpoint [with] 20 lanes in one place.” Additionally, the terminal will allow MSY to get a larger share of the airline business and plan for the future. “It’s going to have expansion capabilities to go to 60 or more gates,” he says.

Multiple architects are at work on the terminal’s design, and construction will start next year. “It is going to be finished by the 300th anniversary of New Orleans, which is in May 2018,” he predicts.

Ahmad joined the airport three-and-a-half years ago and credits MSY’s success to the dynamics and strength of the city of New Orleans. “There’s no other city in the United States like New Orleans,” he stresses. “It has a unique culture and set of traditions that attracts people from around the world.”

He is also proud of MSY’s staff of 5,000 people. “They have created transparency of our operation,” Ahmad says. “They have cut costs and gotten airport financials going in the right direction.”

He predicts that the city will grow robustly. ”The quality of life in this city is getting better and better every year,” he says. “In this dynamics of positive improvements, the airport will be playing its assigned role of the leading economic engine.

“We will not only do that by providing the city with a world-class airport, but because we will get the financials right by cutting costs to the airlines,” he says. “Thus we will see more connectivity to the rest of the world.”