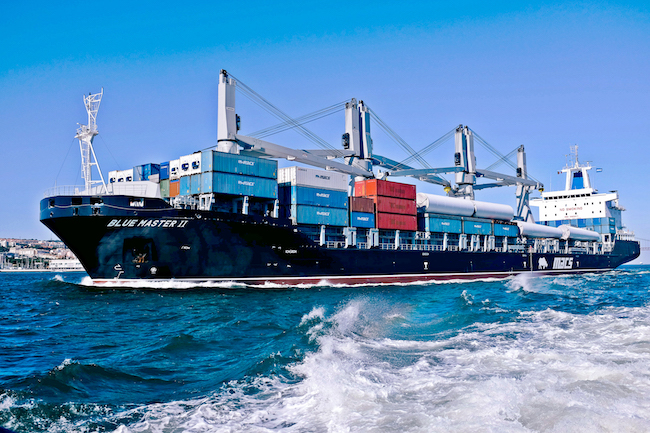 MACS has grown to serve industry giants like Caterpillar and Komatsu.

MACS has set itself apart for nearly 40 years with its hands-on approach with clients. “All of our customers know our faces,” Director David Groves declares.

The company is ready when clients have a question or concern. “We have dedicated teams responding to rate requests and customer requirements,” he says. “We have an experienced team that’s been with us for a long time.” 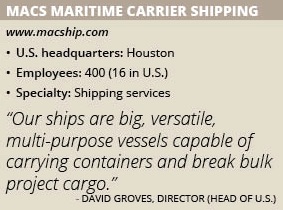 Groves is the director of the U.S. operations of the Hamburg, Germany-based MACS, which provides specialized shipping services to South Africa, Europe, the United Kingdom, the United States and Mexico. Felix Scheder-Beischin Sr. started the company in 1979 and provided a multi-purpose liner service between Europe and South Africa.

When MACS saw demand for more services, it sought to increase its capacity and capabilities with vessels and containers. The company purchased AESL in 1983 and expanded its fleet over the next few decades while enhancing its service offering.

Today, MACS has a total of 15 to 20 vessels in the water at any one time. “Typically, our ships are big, versatile, multi-purpose vessels capable of carrying containers and break bulk project cargo,” Groves says.

“As far as multipurpose liner carriers are concerned, we’re ranked in the top 10 in the world,” he says. The company is a leader when it comes to shipping between South Africa and Europe or South Africa and the United States.

Although MACS is relatively new to the Transatlantic trade, “We have quite a few customers in all three trades,” he says. MACS’s clients include many of the large players in South Africa’s mining machinery market, including Caterpillar, Komatsu and Atlas Copco.

The market has been difficult for MACS in recent years, Groves admits. “But we’re starting to see increases in the shipping industry, particularly over the last three months,” he reports.

The company also has seen an increase in ship costs as well as environmental policies. This past September, a regulation came into effect requiring cargo ships to install ballast water treatment systems.

“That has led to increased scrapping of some of the older ships,” he says, noting that there is also pressure on reducing ship emissions. “Those will have an impact on the industry in the upcoming years, [as we’ll be] moving to cleaner fuels.”

The company also is seeing concerns on both the United States and South African sides, due to “anti-trade talk in U.S. politics,” Groves says. But, he notes, that the political climate in South Africa makes it less of a strong area for investment.

“We’re hoping for some political change coming up,” he says. “Although Jake Zuma, the president there, has another year and a half in office, there’s hope of political change in South Africa to spark the economy there.”

The economy looks stronger in South Africa’s neighboring countries, Groves adds. “There have been projects and increased investments in Botswana, Namibia, Zambia and Mozambique, particularly,” he says.

Groves is proud of MACS and how it has weathered an industry storm over the past few years. “There has been a lot of merger and acquisition activity, but our brand is strong,” he says.

The company will maintain that strength as it concentrates on its trades. “We have made a big move into the Transatlantic trade and we’ll continue to focus on building that up over the foreseeable years,” he predicts.

Recently, the holding company of MACS, Vineta GmbH, acquired the shares of Hugo Stinnes Schiffahrt GmbH which has a history of 200 years in shipping and today offers a liner service from Europe to East Coast Mexico and U.S. Gulf.

MACS operates with a philosophy that reflects the values of its family ownership. “For us, the true value of our business does not lie in the amount of customers we can service, but rather the quality of the service we can provide to the customers who put their cargo in our hands, and their trust in us,” it says.

The company regards its customers, service providers, partners and staff as part of its extended family, making their interests and well being its top priority. “Our business is built on flexibility – this applies both to the cargoes we accommodate, and our willingness to adapt and change as and when our clients and the market demand it,” it says.

MACS says adaptability is key in the shipping industry and beyond. “Therefore, we customize our solutions and service according to our clients’ needs, instead of attempting to redefine their needs in order to make them fit into a predetermined model,” it says.