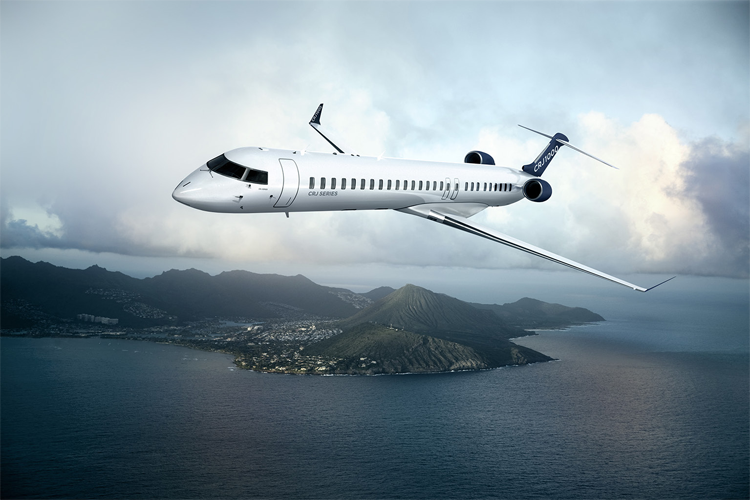 Now that the challenges brought on by a turbulent 2020 are slowly moving behind it, MHI RJ Aviation Group (MHIRJ) is looking to soar into the future with a strong team and a clear vision to be a pioneering support service for its industry

After being forced to remain on the ground, aircraft across the world are taking to the skies, connecting communities once again, despite a year of unprecedented uncertainty. The aviation industry has managed to bounce back quite quickly and MHIRJ is pulling its resources together to ensure planes are of the highest standard and safety. “We all thought it would be a much longer recovery period than what it’s turning out to be. Our company inhabits the smaller end of the airline spectrum where the flights are generally shorter and the passenger counts are under 100 seats; that segment has recovered even quicker than the main airlines, which none of us anticipated,” shares Ross Mitchell, who is the Vice President of Corporate Shared Services. He discusses the new ventures that the recent merger between Mitsubishi Heavy Industries (MHI) and CRJ has opened up for his business, as well as the challenges that his sector has had to overcome during the past 18 months. “As you can imagine, the impact of the virus on our industry has stretched our supply chains fairly thin when everything shut down completely and then moved into a rapid acceleration as passengers got flying again. I think the focus between now and the end of 2021 is making sure that as airlines put their planes back in the air, we need to be at the top of our game.

“The other challenge for us and the industry is getting the right people to do the job. I think recruiting skilled and talented individuals is tough at the best of times. In aviation, we can’t just 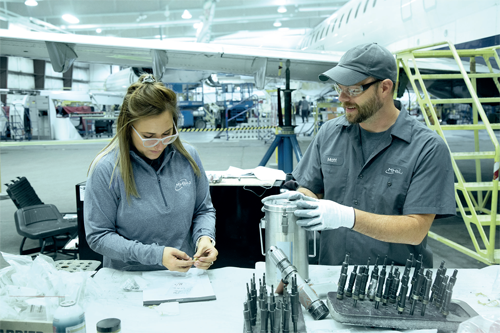 take anyone off the street to maintain an airplane, they need to have several years of training before they are licensed. So, we need to solve the personnel issues as well in order to continue a strong recovery moving forward,” he says.

While MHIRJ may be a young company, the two businesses that were brought together are old timers in their own rights. The first CRJ made its first flight in 1991 and received its Canadian certification in 1992.

Mitsubishi, on the other hand, can be traced back to the late 19th century when Yatarõ Iwasaki took a lease out on a shipyard based in Nagasaki to start his shipbuilding business. By 1934, the business had established itself as the largest firm in Japan manufacturing ships, heavy machinery, airplanes and railroad cars. However, last year proved to be an exceptional challenge for the aviation industry, and despite the consequences, the company managed to sail smoothly through the merger transition. “We closed the contract on June 1, 2020, which was around the time that the pandemic was at its peak and impacting aviation very seriously. Yet through all of this, we’ve had to move our employees from their former offices to the new ones in Toronto and Montreal, build a new culture and get everyone settled in the business, which I feel is a really significant milestone,” Ross shares.

The merger brought together the capabilities to provide MHIRJ clients with three core services, with the most crucial consisting of support given to the existing CRJ fleet. Now, with roughly 1300 planes, the company runs two repair and overhaul facilities, which, when combined, sets it up to be the largest regional maintenance, repair and operations provider in the world. “We maintain the aircraft predominantly for American customers and most of the regional fleet that moves people around in the US is maintained through our service centers. We also reinforce this with our engineering support. The majority of our engineers are found in our headquarters in Montreal. In that regard, we provide a 24/7 response center to deal with any issues that may happen in the field with respect to the aircraft. We also have component replacement and overhaul available and supply a number of spare parts for customers through our distribution centers,” he adds.

The second service within the business’s portfolio involves its aerospace engineering center, where expert MHIRJ engineers offer aircraft design and certification services to third-party customers. “Whether it’s a startup company looking to bring forward a new battery electric aircraft or someone in another industry that needs engineering support, our engineers are now capable of taking on projects for other companies and supporting them with the qualifications that they have in design, testing and certification of aircraft.

“In the final area, we have our advisory services team, which is made up largely of our commercial and marketing group, who would usually sell aircraft. Now, they are turning outward and providing consulting services. This service assists those who are beginning to navigate the market landscape and require a second opinion on how best to manage their business – so it’s really those three aspects that make up what MHIRJ is today,” he explains.

With these services at the ready, Ross is proud to share the business’ success in continuing to invest in growing its resources and developing its infrastructure, noting that the aviation, engineering and aerospace advisory services are brand new and doing well. “Those didn’t exist before, but recently we’ve announced the expansion of our Bridgeport facility to take on more lines of maintenance. As we continue to provide the best services for our clients, we are also expanding into the component repair and overhaul sectors, as well as used serviceable material to assist with increasing the company beyond its original footprint. We’re pushing our revenue so that we can look at further expansion opportunities as well as cementing our two businesses to make for a stronger and more united company,” he explains. 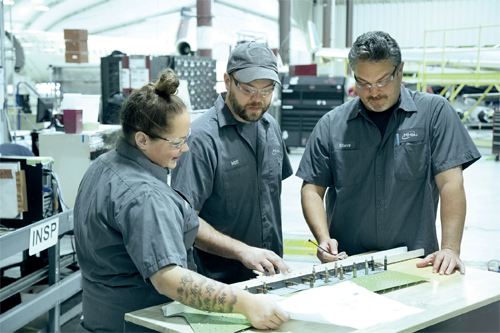 As Ross has emphasized, the main reason bolstering these expansions is that the business is swiftly moving into becoming a manufacturing certificate holder for its clients’ aircraft. At the moment, many airlines with in-house maintenance operations and that conduct the servicing themselves pay a higher price to ensure their planes are safe and secure. “With us, on the other hand, we’re able to take these skills and abilities of our workforce, and the experience that we’ve accumulated to make sure that we can drive down the costs for servicing these airlines,” he states.

Now that MHIRJ is moving into its second year of servicing the aviation industry, it is honing its focus in on the well-being of the people within the business. “We are quite a far-flung company in that respect, we have offices across North America and so keeping in touch with everyone is vital to us. It’s been a challenge with the fact that for the last 18 months, everyone has been working out of office and we’ve had to make some pretty significant changes. To ensure that everyone was aware and involved in what was happening, we instituted quarterly employee meetings over Zoom to update the team on the status of the business. What we’ve also been trying to do is provide a bit of an education on the larger company we’re now a part of, because most of our employees came from CRJ and didn’t know very much about MHI. We hosted small segments to keep in time with the pulse of their thoughts and concerns and ensure that we gave them as much information as possible. But of course, it’s not all business around here!
We also encourage a little bit of entertainment to try to bring in as much fun and interaction as possible,” he expresses.

Ross shares the story of the virtual celebrations the company hosted to honor MHIRJ’s first anniversary. Not only did the event commemorate its success, it also commended the resilience of its team to push through a challenging year of obstacles. “We had a singer-impressionist perform an online concert for us, which was part of a personalized party for our employees. It’s strange to think that none of us had actually been together in more than a year and weren’t able to get together before the fact or after. So, when it comes to moments like that, we’ve tried to come up with creative ways of keeping everyone in touch and part of the family,” he says.

According to Ross, now that MHIRJ has finally settled into its new home, it is looking to the future of its industry with a focus on strengthening its services in order to support clients in the best way it can. One of these measures is to encourage the innovation of greener strategies for the aviation sector. “Many of the companies that are moving towards that zero-emission goal want to introduce new technologies to the market. In some cases, they are smaller businesses and don’t have much experience in testing and certifying aircraft, so we’ve been engaged in a campaign to go out to all of these companies and offer up our services to bring them through the process. We’ve found that working with the Federal Aviation Administration or the European authorities can be quite a complex procedure, but our team has certified a number of airplanes over the years so we’ve gathered a methodology that is thorough, succinct and runs smoothly for our clients,” he adds.

Ross believes that supporting other companies in their drive towards a more sustainable future is a significant step for the industry, although it may not be easy. Of all the transport industries, the one that will be most challenging to meet green targets is aviation. “Weight is the enemy of flight performance. We’re talking about lifting massive objects into the air to travel long distances and electric batteries are inherently heavy, but we’re getting involved to help some of these companies move forward.”

As MHIRJ gears up for an exciting future, it is also keen to welcome new members onboard to join the team. “On the recruiting front, we are actually trying to hire a number of people. We’re looking for aviation technicians, and I think that will be a permanent fixture of our organization going forward, so send us your applications,” Ross adds excitedly. This, he hopes, will help push the business forward as it strives for continued success for the remainder of this year and beyond.