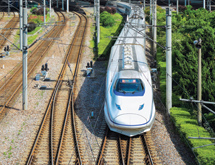 With more than 40 years of experience under its belt and a widespread reputation for quality and service, it’s easy to see why MotivePower Inc. is an industry leader in the design, manufacturing and re-manufacturing of diesel-electric locomotives.

Since 1972, the company – established as the rail systems group of manufacturer Morrison Knudsen and formerly known as Boise Locomotive Company – has successfully manufactured and delivered more than 2,500 locomotives from its manufacturing facility in Boise, Idaho. MotivePower is a subsidiary of Wabtec, which was formed following the merger of its parent MotivePower Industries Corp. with Westinghouse Air Brake Company in 1999.

“MotivePower’s extensive system integration and application engineering experience are unmatched in the industry,” the company says.

“From new locomotives designed from the ground up to modernizing older locomotives, MotivePower has the engineering expertise to tackle even the most complex project.”

The company’s core products and services include new commuter and switcher locomotives, locomotive overhauls and modernizations, OEM locomotive modules, emissions reduction and contract fleet maintenance. One key product is the MPXpress® diesel-electric commuter locomotive, introduced in 2003 and designed by with crew safety, performance and reliability in mind. The locomotives meet the latest crashworthiness and safety standards set by the American Public Transportation Association.

MotivePower is the only manufacturer of new diesel-electric commuter locomotives in North America. In addition to the MPXpress locomotive, the company is also capable of upgrading existing units with remanufactured components, allowing rail agencies to modernize their locomotives at a reasonable cost.

Diesel emission reduction is a high priority for the company. “We are committed to assisting railroads in their ongoing efforts to reduce locomotive emissions and improve operating efficiencies,” the company says. “We designed and manufactured the only four liquefied natural gas locomotives operating in North America and were the first to provide Tier 2 low-horsepower locomotives and Tier 2 commuter locomotives.”

“We are the industry leader in engineering expertise and quality in locomotive overhaul, remanufacture and modernization services,” the company says. “We can help to develop a specification that meets our client’s needs and budget.

“We can extend the service life, improve reliability and enhance performance of a locomotive fleet.”

Overhaul and maintenance services include complete locomotive overhauls, engine and truck overhauls, electrical cabinet upgrades and rebuilds, microprocessor control upgrades and design and fabrication of locomotive structures including the cab, car body and frame. The company has maintenance operations in California, Texas, Utah and Idaho.

MotivePower’s manufacturing operations are driven by its use of lean manufacturing techniques patterned after the Toyota Manufacturing System. These techniques, known collectively as the Wabtec Performance System (WPS), are designed to bring about continuous improvements in quality, delivery, cost, productivity and product development. The company is ISO 9001:2000 registered and AAR M1003 certified.

“The ideals embodied in WPS, including the constant pursuit of quality, continuous improvement and the elimination of waste, are ingrained in the Wabtec culture and produce meaningful, substantial results,” MotivePower says. “Wabtec aggressively applies a variety of WPS techniques to its business, manufacturing and product development processes throughout the corporation to generate improvements that benefit all stakeholders.”

MotivePower holds an annual three-day kaizen event and conducts continuous improvement projects year-round. As a result of these events and projects, the company has seen an optimized use of its floor space, labor and equipment, reduced its work-in-process inventories, increased its inventory turns and improved safety and quality.

Other components of the WPS program include statistical engineering and value stream mapping and a priority deployment process that focuses employees’ efforts on achieving major objectives that support its long-term goals, the company adds.