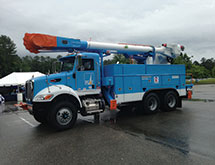 Cutting back is rarely an option for Pacific Gas & Electric (PG&E). Founded in 1905, the California utility company is one of the largest combination gas and electric utilities in the United States, covering 70,000 square miles of central and northern California. Today, it serves approximately 15 million people and that population continues to grow.

“We have a customer base that grows every year,” says Dave Meisel, senior director of transportation and aviation. “We have to have service for each one of those customers so as the base grows, we grow with it.”

The region’s growing population directly affects PG&E’s operation, including its fleet management. For every electric pole that needs replacing and every customer that needs assistance, there is an accompanying employee and vehicle to handle that need. PG&E’s fleet operation encompasses 14,000 pieces of equipment ranging from air transport to ground vehicles such as standard cars, pickup trucks, and tractor trailers with attached equipment such as lift buckets and cranes. Its facility footprint spans just north of Los Angeles to Oregon and west from the Pacific Ocean all the way to Nevada. It has 72 garages and 80 mobile maintenance technicians that travel to remote project locations to service the vehicles.

Though it already has a massive operation, PG&E continues to purchase thousands of new units each year. In an average year, the utility provider might buy 1,500 to 1,800 pieces. Last year, it purchased 2,700 new pieces, which is “a big number, even for us,” Meisel says. Most of those pieces, however, were replacement vehicles, but approximately 1,000 were fleet additions. Some of them were part of a scheduled replacement plan to comply with California’s emissions requirements. Many of them are fitted with sustainable technology that helps contain the costs of running PG&E’s wide-ranging fleet – because although the company continues to grow, it always does so with an eye on the bottom line.

“In addition to our regular investments, we do a lot of things that are more project-oriented,” Meisel explains. “We are working on developing new technology and most of it is focused around emissions compliance or electric and natural gas projects.”

For instance, PG&E continues to perfect its electric power takeoff (ePTO) technology used in many of its commercial applications. In the past, when a work crew reached its destination, it would still have to idle the engine so it could power components needed to perform the work – items such as the bucket truck to lift crews up to a power line, the climate control system and lights.

PG&E worked with utility equipment manufacturer ALTEC to develop a more economical solution, and they came up with the ePTO. Instead of burning fuel to run necessary equipment, many of its trucks are fitted with a battery that will power the equipment all day even when the engine is off.

“We found that for every hour of idling a day that we reduced through the ePTO we saved about $1,000 in fuel per truck per year,” Meisel says.

“We started working on the first version four years ago and it’s in its fifth generation now so it’s pretty bullet-proof at this point,” Meisel says. “We are like other big companies; when we develop new technology, we work with it on one piece and if we like it, we might buy five and then 50 and then 500 and then it becomes the standard of doing business.”

It’s the same concept PG&E is applying to one of its newest innovations. The company is working with several manufacturer partners to develop onboard generators for trucks that could be used for emergency response or to power customers’ homes as a secondary source as utility crews work in the area. This will eliminate crews having to disable electricity as they work, resulting in reduced outages and improved customer satisfaction. Crewmembers could take their working area off the main grid, plug it into their generator and unhook and plug back into the main grid once their work is done, eliminating power disruption. PG&E is having 10 produced over the next few months and is using a California Energy Commission grant to study and draft safety protocols for the new technology. The team is also getting ready to introduce the new technology in June at the Edison Electric Institute meeting held with utility industry CEOs across the nation.

“We started working on this about 12 months ago,” Meisel says. “We’ve worked on smaller ones for several years and now we are moving up to larger commercial vehicles. We see it being used in the field sometime in 2015.”