Back to Features > Panama Canal 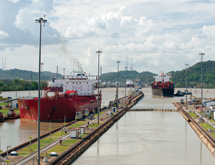 For the past six years, the Panama Canal Authority has been hard at work on an expansion project expected to double capacity and create a new lane of shipping traffic. The roughly $5.3 billion project will prepare the canal for today’s larger container ships by creating new locks and channels to those locks, as well as widening and deepening existing channels.

The Panamanian government has been optimistic about the project’s economic impact. During a speech announcing the project in 2006, then-President Martin Torrijos likened the canal to a natural resource like petroleum, and said that this project would allow Panama to better utilize that resource. An improved Panama Canal, Torrijos said at the time, would transform Panama into an economic force to be reckoned with.

Many observers who are excited by the project say it will have significant benefits for the United States, as well, with ports on the East Coast supposedly in line for greater activity as shippers take advantage of the new Panama Canal. Many ports up and down the East Coast already have upgraded their facilities to accommodate an increase in traffic from the expanded canal.

However, there are others who say that although the expansion of the canal will result in some economic benefits for Panama and American ports, the project will not be the windfall others are predicting. One of those voices urging caution is Ed Sands, global logistics lead at Pennsylvania-based procurement outsourcing company Procurian. Sands says the expanded canal will be a strong motivator of economic growth, but a variety of external factors will prevent it from being as strong as some believe.

The average size of container vessels is growing at an astonishing rate, which is one of the primary motivators for the Panama Canal expansion. The canal currently can accommodate ships in the range of up to 5,000 twenty-foot equivalent units (TEUs), but according to a recent report by Colliers International, the newest generation of container ships will be in excess of 12,500 TEUs.

The move to larger container ships has been the carrier industry’s response to the global recession, according to Sands. He says carriers are trying to maximize their savings by switching to a low-cost model of operations that emphasizes sailing at slower speeds with larger loads. The Panama Canal is being expanded to accommodate these changes, but as Sands notes, options already exist for shippers to move cargo of that size. “All of that investment benefits the Suez Canal,” he says.

The Suez Canal already has become a popular option for shippers with the larger, slower ships of today, and Sands says he believes it will continue to be even after the Panama Canal expansion is completed. For example, he points to the fact that Maersk Line has dropped use of the Panama Canal for service to the East Coast in favor of the Suez Canal, along with many smaller carriers. To make matters more challenging for Panama, construction has been delayed by six months, giving shippers more time to get set in their current habits.

Those most likely to feel the impact of the affect the Suez Canal will have on the expanded Panama Canal will be those who invested in the expansion project, Sands says. “They’re the ones who will feel it more likely than anyone,” he says, adding that the return on investment they were promised by the canal authority nearly eight years ago won’t be as substantial as expected.

“Panama will benefit, but again our point is that it won’t be to the extent that was thought initially,” Sands says.

The true beneficiaries of the Panama Canal expansion may turn out to be East Coast ports after all, because many of them already are ready to handle larger ships coming from the Suez Canal. Although some ports like the Port of Jacksonville in Florida have struggled to make the necessary investments, Sands says, most East Coast ports have the capacity they need to benefit from the traffic already coming through the Suez Canal as well as the boost in traffic expected from the Panama Canal expansion. “They’re almost in a no-lose situation,” Sands says.

Although the Panama Canal expansion probably won’t be quite the economic boon its supporters claim it will be, Sands and others say that it has more to do with the lofty expectations they have set rather than a failing on the part of the project itself. “They all had gargantuan goals around what the expansion was going to bring,” Sands says.