SP80: On a mission to break zero emissions speed records. By Russell Edson

This Patent of the Month relates to a pending patent application filed by a team of engineers and students from EPFL, a university located in Lausanne, Switzerland, working under the name SP80. The team is looking to challenge the World Sailing Speed Record, currently held by the Vestas Sailrocket 2, which set an average speed of 65.45 knots over 500 metres in 2012. SP80 is hoping to beat that by a significant margin, aiming for speeds of up to 80 knots. 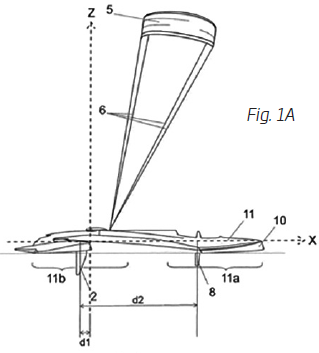 Beating sailing speed records requires innovation to extract power from the wind more efficiently. SP80’s European patent application, EP3939876A1, focusses on a mechanism that aims to do just that, balancing hydrodynamic and aerodynamic forces to stabilise the vessel.

The watercraft, pictured in Fig. 1A, above, comprises a hull (11), the stern (11b) of which features a rear drift (2). SP80 has opted for a large kite wing (5) to generate high power from the wind which, as a result, generates large tipping movements. The kite (5) is attached to a rotatable arm (1) of the watercraft by guidelines (6). The kite, while generating significant power, has an effect on the watercraft’s stability as it can make the watercraft tip, or “heel”, affecting handling and potentially causing capsizing when not sufficiently countered.

Figs. 2A and 2B, top middle column, show the new mechanism which SP80 uses to stabilise the vessel. The rotatable arm (1) to which the kite (5) is attached is linked to a hydraulic cylinder (14). The cylinder (14) has a rod (15) which, when translated, rotates the drift (2).

The result is that the drift (2), as shown in the figure 3C and 3D, bottom middle column, is dynamically rotated to generate a hydrodynamic publications (prior art) that it believes show some of the broader aspects of SP80’s stabilising mechanism, it also 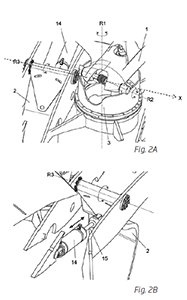 identifies aspects it believes are inventive compared to the prior art. It is up to an applicant to decide and argue what they think is innovative about their invention, but patent office examiners sometimes offer suggestions as well.

Even an applicant’s own prior publications can act as prior art, and the SP80 team must prove what is innovative about the new mechanism in their patent application compared to an earlier version of their vessel, which was published in an online article before their patent application was filed. It is therefore important that innovators in all fields carefully plan to file for IP protection before publishing the key details of their innovations.

Wind-powered transport is making a comeback across several sectors, including cargo and passenger transport, not least because of its low emissions and the ‘free’ source of energy that the wind provides. While SP80’s innovation may be focussing on speed records at this stage, it could lead to wider applications. 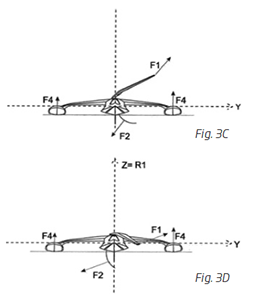 Many key technologies in use in commercial transport today have their origins in high performance sport. Anti-lock brake systems (ABS), dynamic suspension, traction control and regenerative braking have all been developed and/or refined in the motorsport sector and are now widely used across all vehicle categories. SP80’s invention may therefore be able to improve the application of wind power elsewhere in the maritime industry – such as in cargo shipping or passenger vessels. Obtaining strong patent protection and licensing the technology to other industry players could see SP80 recoup its investment and make significant returns.

Russell Edson is a partner and patent attorney at European intellectual property firm, Withers & Rogers. He specialises in advising innovators of technologies for use in a variety of transport industry settings – road, rail, air and marine.
www.withersrogers.com