In general, modern trains are very long and are driven by a forward engine, located close to the driver’s cabin. Therefore, when a train is reversing, the driver is often unable to see any potential hazards or track-side personnel at the rear of the train. As such, the risk of inadvertently striking a track-side worker is much higher than when the train is moving forwards.

The location of the engine means that the end of the train is fairly silent and can approach track-side personnel unawares, particularly if they are operating noisy machinery. This problem is further exacerbated by trains often being reversed towards the end of a shift, or during off-peak service times, meaning that track- side conditions are dark and visibility may be poor. These factors can make railways and railyards a hazardous environment for personnel.

To help address this problem, Birmingham-based company, Rail Safety Solutions Limited, has identified the need for a warning system to help improve worker safety. It subsequently filed a UK Patent for this technology in September 2018, which was granted in early 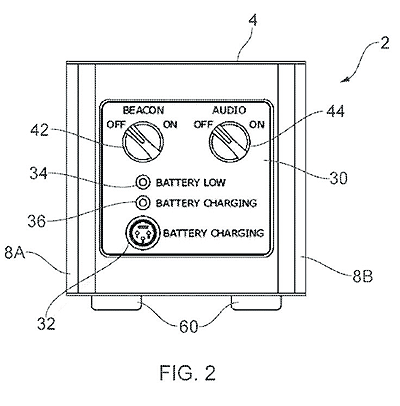 Rail Safety Solutions Limited’s patented invention takes the form of a battery-operated wireless warning system, containing a beacon, an audio speaker and a pair of magnets (60), which allow the housing unit (4) of the system to be easily fixed to the rear of a train.

Prior to reversing, the train operator – or a worker – can fix the warning system to the rear of the train before activating the beacon and/or audio speaker using the respective switches (42 and 44).

Once activated, the beacon emits a flashing light, which provides bystanders with a visual indication of the location of the train. Similarly, the speaker provides an audio message upon activation, such as ‘warning – this train is moving’, to help further identify the potential hazard to any workerstrack-side workers. In doing so, Rail Safety Solutions Limited’s product is helping to make railyards and other track-side locations a safer environment.

Patents have a life span of up to 20 years from the date of filing and this valuable monopoly gives the patent owner a period of exclusivity during which they can control the manufacture, sale and licensing of their innovation. Therefore, Rail Safety Solutions Limited can now benefit from the power of a granted patent, helping the business to establish a market for their product. Without patent protection, competitors would be able to freely copy the innovation, flooding the market and diluting the success of the original product.

Now that a patent has been granted, Rail Safety Solutions Limited will also be able to make the most of the Patent Box corporation tax relief on profits generated from the sale or licensing of its product.

Although a relatively simple and straightforward concept, this warning system has the potential to save lives, showing that companies don’t have to reinvent the wheel in order to create a product worthy of patent protection.

It will be interesting to see to what extent this technology becomes adopted by railyards and other rail operators in the near future.