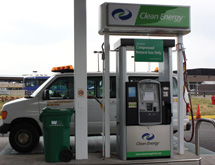 “The Port Authority currently has a fleet of about 2,000 vehicles,” says James Reinish, manager of the port authority’s central automotive division. “Our vehicles range from small light-duty vehicles and small construction equipment all the way up to very large, complex equipment such as snow removal equipment for the airports. The central automotive division is responsible for everything – the purchase of the equipment, the planning and specifying of equipment and ongoing maintenance.”

For just about every task performed by the port authority, there is a piece of equipment to go with it.  Debris removal requires dump trucks, vehicular accident response requires wreckers,  police officers need police vehicles and so on.

The central automotive division is charged with making sure that each task is matched with the right vehicle and that it’s done in the most efficient way possible. Over the past 10 years, a large part of its strategy has focused on fuel costs.

“One of port authority’s main goals is to ensure that 100 percent of the light-duty vehicles we purchase are green, whether it’s hybrid, compressed natural gas, biodiesel, or ethanol (E-85),” Reinish explains. “For the bigger equipment, the agency began converting our diesel pumping facilities to biodiesel and now 100 percent of our diesel equipment is fueled by biodiesel, using a B-20 mix.

“Equally important to acquiring the green vehicles, is having the infrastructure in place to fuel them. In fact, one of our airports, John F. Kennedy International Airport features one of the first hydrogen fueling stations in the nation.”

The port authority realizes the impact of climate change and the need to mitigate the inherent risks, particularly those associated with traditional fossil fuel. In addition to biodiesel, the port authority also is looking to increase its use of compressed natural gas, as well as E-85 and hybrid electric powered vehicles.

“More than 80 percent of the port authority’s current on-road fleet is green,” adds Reinish. “This is a true testament to the agency’s commitment to environmental stewardship and green technology. By next year, the port authority hopes to increase the size of its alternative energy vehicle convoy.  “With the price of alternative fuel vehicles falling and the cost of fossil fuels rising, purchasing these vehicles will help the agency save on fuel costs,” he continues. “More importantly, the port authority’s investment in this green technology will help us reduce our carbon footprint – which is the main goal of the agency’s Clean Air Strategy.”

He’s hoping the agency will be able to do the same with hydrogen-powered vehicles. For the last four years, it has worked on a pilot project with Toyota, General Motors and Shell to test out hydrogen fuel cell vehicles; these prototypes were only available to research institutions and the port authority. The agency hosted 12 hydrogen-powered Toyota Highlanders; Shell and GM built a hydrogen fuel station at JFK airport, which it later handed to United Hydrogen to operate.

“The project is coming to an end now and we’re waiting for the next step, which would be Detroit and Japan ready to commercially sell hydrogen vehicles,” Reinish explains. “The vehicles have basically zero emissions and it’s incredible. They drive just like any other vehicle and you wouldn’t know it was hydrogen. It’s an exciting technology, but the biggest issue moving forward is how much the vehicle will cost to manufacture it and if the public and public agencies can afford it.”