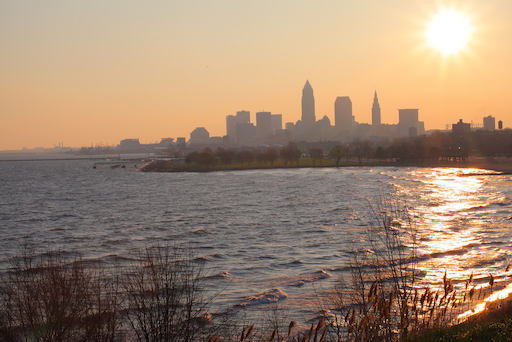 The Port of Cleveland is investing in infrastructure and services such as the Cleveland-Europe Express line to compete for containerized cargo.

When the Port of Cleveland developed its last strategic plan in 2011, many of the ideas that resulted stemmed from one important question: How do we take back the cargo lost to coastal ports?

The 2011 plan found that getting back into the container business would give the Port of Cleveland’s manufacturing users another option for moving products in and out of the country. A key part of executing that strategy was the creation of the Cleveland-Europe Express, the only direct, scheduled vessel service between a Great Lakes port and Europe.

The line, operated by the Spliethoff Group, began in 2014 with once-monthly service between Cleveland and Antwerp, Belgium. It expanded to twice-monthly in 2015 and the plan is to bring it close to a weekly service this year.

There’s also the time advantage. For a Cleveland-area manufacturer to ship to Europe through an East Coast port – the conventional route – it can take 20 to 30 days. The Cleveland-Europe Express has trimmed that timeline to 14 to 16 days. “We can produce door-to-door transit times much quicker than handling cargo through an eastern port,” Gutheil touts.

The Port of Cleveland operates 12 docks on Lake Erie at the mouth of the Cuyahoga River. It primarily serves northeast Ohio, parts of Michigan and other Midwestern states. The port generates $1.8 billion annually in economic activity, of which $100 million is in Ohio income taxes, according to Jade Davis, vice president of external affairs. More than 18,000 jobs are tied to the port. “We’re a key cog in the economic machine here,” Davis adds.

The port has two separate operations: one to handle bulk cargo such as dry cement and limestone and the other for international shipments. As an inland operation, ships must travel through the St. Lawrence Seaway. That restriction results in less activity than its coastal competitors but its smaller size grants the Port of Cleveland more flexibility to serve customers. “It allows us to be more nimble,” Gutheil explains. “We’re very much a boutique operation but one that focuses on service and efficiency.”

Because of its size and lower volume, the Port of Cleveland is less congested than other ports. The Ports of Los Angeles and Long Beach, two of the busiest in the country, have become known for strangling congestion and lengthy shipment delays. A labor dispute that stretched from 2014 to 2015 only made congestion worse.

The picture is far different at the Port of Cleveland, which prides itself on quick turnarounds. Gutheil says crews can unload and have most cargo out for delivery within 48 hours. A shipment traveling to Columbus, Ohio, can arrive the day after being taken off the vessel. “The lack of congestion and fast door-to-door transit time is our calling card,” Gutheil says. “We don’t have the congestion issues the costal ports do.”

Access to the Midwest is another major advantage for the Port of Cleveland. Shipments destined for the middle part of the country that flow through the east or west coast must be transported long distances by truck or rail. Going through Cleveland, which may be closer to the origin or destination of customers’ cargo, offers an alternative with fewer security and oversized fees, less permitting from various states and less of a need for law enforcement escorts, Gutheil says.

Many manufacturers in northeast Ohio and along the Ohio River rely on the Port of Cleveland as a key part of their supply chain. Companies that utilize products such as cement and iron ore transport materials along the Cuyahoga River to and from the port. The ArcelorMittal steel mill in Cleveland, for example, takes in as much as 4 million tons of iron ore from the port.

The Port of Cleveland continues to invest in its infrastructure and new services to support its role in the supply chain of the Ohio economy. Construction on a new warehouse for containerized service is underway and the facility is scheduled to open in mid-June. Two new mobile harbor cranes from Liebherr will begin operating this spring.

Several improvements from the 2011 plan are already in place. Four years ago, the Port of Cleveland constructed a mile of rail track to connect the segregated CSX and Norfolk Southern rail lines that served the port. The connection gave shipments on both rail lines access to the entire port, improving efficiency and flexibility.

Those improvements and the introduction of the Cleveland-Europe Express have grown the port’s cargo business substantially since 2011. The containerized portion of the business grew 400 percent and total tonnage is up 500 percent. “We more than tripled the number of containers we handled,” Gutheil says.

But Gutheil is not willing to stay satisfied with that progress. “We will constantly look for additional services we can offer our customers,” he says. The Port of Cleveland is working to add more runs from vessel lines, make infrastructure improvements and learn how it can make in-out gate times even more efficient. The latter goal could mean expanding the main gate, adding lanes and increasing manpower to move trucks through the gate as quickly as possible.

To make that possible and continue its commitment to zero congestion, the port is analyzing the potential of restoring one of its dormant berths, Dock 20, to operation. That additional berth will enable the port to manage even more international cargo. “Continued increases in our tonnage means more space will be required,” Gutheil says.

Part of operating the port means ensuring clear connections downstream to customers. The port is involved in a number of local environmental issues that impact the region’s waterways – and its own operation. The port is sponsoring infrastructure improvements to the Cuyahoga River with the Irishtown Bend project, an effort to prevent the collapse of a hillside into the river. Engineers hired by the port have developed a $49 million plan for new bulkheads that would reinforce the hillside, protect the navigation channel and create new usable land.

Great Lakes ports in general have different challenges from coastal maritime ports. The St. Lawrence Seaway, through which all Great Lakes international shipments must flow, closes for the winter from late December to late March, greatly limiting access to worldwide markets. During that period, the Cleveland-Europe Express line is redirected through the Port of Baltimore.

Gutheil believes offering better services, increased efficiency and infrastructure improvements will continue to make the Port of Cleveland a challenger despite those obstacles. “We have to be a little more creative in starting services like the Cleveland-Europe Express in order to compete with the coastal ports,” he says. “We just need to continue to expand and improve upon the services we have.”