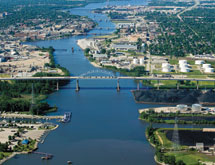 Now that spring is spreading over North America, the ice and snow of last winter is becoming a distant, if not fond, memory. But in northern Wisconsin, a record year of cold can make the difference between letting Mother Nature break the ice in the deepwater Port of Green Bay, Wis., or requesting a Coast Guard ice-breaking ship.

“We can request Coast Guard icebreaker assistance to get us open this year, and this is driven by economic need,” reports Dean Haen, director of the Brown County Port and Resource Recovery Department, which oversees operations at the Port of Green Bay.

The Fox River flows into the Bay of Green Bay and 14 companies in a variety of industries have terminals along the river. Because of the annual freezing of the Great Lakes, these companies must stock up on supplies over the winter, and those supplies can only last so long. “Because of early ice conditions, we shut down early, so there’s a good likelihood that our docks will run out of raw materials sooner than later,” Haen points out. “Whether it be cement or coal, someone is going to have a need.”

All the terminals at the Port of Green Bay are operated by their owners. “The infrastructure we have are dock walls and real estate,” Haen explains. “In terms of staffing, what we do for all of the terminal owners is we serve as the common voice for common issues, such as regulatory issues, making sure the port is dredged and maintained, and whatever the legal issues are at that time.”

A major project for all the port’s users is the $17 million rebuilding of the Cat Island Chain, a series of islands in the lower bay approximately two miles northwest of the mouth of the Fox River. The islands – which eroded in the 1980s – will be reestablished with material that is dredged from the 14-mile channel that extends 4 miles up-river and 10 miles into the bay. The island will provide a nearby and inexpensive location to dispose of dredge material and simultaneously serve as a bird and fish habitat.

A recent improvement at the Port of Green Bay is the rehabilitation of a terminal owned by U.S. Oil, a division of U.S. Venture Inc., and dredging of the river in 2011. U.S. Oil recently purchased a barge and a tug boat that it had been leasing to transport refined petroleum products such as gasoline and diesel fuel across Lake Michigan to its terminal in Cheboygan, Mich., and other eastern terminals.

U.S. Oil spent approximately $2.5 million on improvements to its Green Bay terminal. These included new mooring structures, a vapor control system that combusts fuel vapors that emanate from the barge as it is filled and dredging the river to a navigable depth of 24 feet.

The Port of Green Bay assisted U.S. Oil in obtaining a $1.9 million harbor system grant from the state of Wisconsin’s harbor assistance program. “The port was very supportive of our project and was an excellent resource during the grant application and submission process,” declares Chris Lamirande, U.S. Oil director of business development.

U.S. Oil shipped more than 220,000 tons or 11 percent of the port’s overall activity in 2012. “We were able to deliver on the promise and really increase the activity in the Port of Green Bay,” Lamirande says. A pipeline from Chicago that ends in Green Bay gives U.S. Oil an economical source of refined petroleum products.

“Green Bay provides a good launching point for product leaving the Midwest,” Lamirande concludes. “The buildout and rehabilitation of our Green Bay dock also provides us with another mode of supply for our market in the event of a refinery or pipeline disruption.”

For the future growth of the Port of Green Bay, Haen is working on establishing an intermodal facility in Green Bay. “Currently, there are no containers moved on the Great Lakes on the water anywhere,” he maintains. “There’s regulatory hurdles that prevent that from happening. So we’ve been trying to get Congress to pass a short sea shipping bill that will encourage movement of a small allotment of finished goods from port to port around the U.S. and Canadian cities on the Great Lakes. So in anticipation of that happening at some point, we’ve been pursuing an intermodal facility in Green Bay.”

The port also will reconstruct another oil company’s marine terminal and plans to develop several properties along the Fox River that are best suited for port-related use and which could even be designated as a foreign trade zone.

“I think the port has always served as a leading indicator of economic activities, usually waning just before an economic downturn and increasing in advance of an economic upturn,” Haen maintains. “You can see from our tonnage when we were up 17 percent last year, and that’s coupled with the fact we had to shut down two weeks early because of early ice conditions. The fact we were up 17 percent shows that our economy in northeast Wisconsin is improving. People are optimistic. They are buying raw materials so they can manufacture something.”