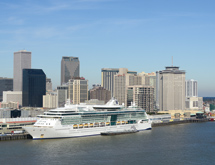 It accommodates a yearly average of 1,800 oceangoing vessel calls, is the only seaport in the United States served by six Class 1 railroads, and is a leading port of imported steel, natural rubber and coffee. The activity at the Port of New Orleans is responsible for 160,500 jobs, $8 billion in earnings, $17 billion in spending and $800 million in taxes statewide. No port gets to this point by sitting still.

“We’re operating right now under a master plan that was developed in 2008 that takes us out to 2020,” President and CEO Gary LaGrange says. “We tweak things annually as need be.”

The Port of New Orleans certainly has a lot of space, but every last inch of it counts for something. Projects are built in partnerships and always answer a need.

Take, for instance, the growth in container cargo movement, which has grown exponentially each year. Building infrastructure to meet this demand was one of LaGrange’s first tasks.

“In a previous timeframe, our facilities were narrower and weren’t geared to handle the complexities of container movement,” says Chief Commercial Officer Bobby Landry who has been with the port for 24  years. “Gary has been on the forefront of making sure we have adequate facilities to handle containerization because that’s really where the growth is heading in our industry.”

In 2004, the port developed a container terminal that handles 640,000-TEUs annually. The port is currently adding an intermodal rail terminal that will increase capacity to 840,000 TEUs. Over the next 10 years, the port has planned phases to increase its TEU capacity to 1.6 million with 12 gantry cranes.

The expansion, according to Landry, will occur within the container yard’s existing footprint so as not to encroach on the port’s other economic avenues. Container cargo may be one of the fastest-growing trends in the shipping industry, but it’s not the only one. For instance, breakbulk cargo is still a major growth vehicle for the Port of New Orleans.

“We’re still a 50 percent breakbulk port,” Landry says. “We have some aggressive plans to grow containers but we’re doing that in the existing footprint. We’re not going to cannibalize our breakbulk space because breakbulk is just as important.”

In fact, between Baton Rouge and New Orleans, Landry says there are more than 50 different projects under various phases of construction right now to build chemical plants that rely on breakbulk transportation. The move of international chemical manufacturers into the United States has been spurred by the low cost of natural gas due to numerous shale plays happening throughout the nation. Cheap gas equals cheap transportation and declining logistical costs helps manufacturers keep cost down on the end-product.

The Port of New Orleans partners with private companies to operate the necessary infrastructure that will handle the growing breakbulk shipments. It currently has 13,511 feet of berthing space available at six facilities tailored to breakbulk cargo and 1.6 million square feet of transit shed area for the temporary storage of breakbulk cargo.

One of its valued partners within the breakbulk market is TCI. TCI stepped up several years ago to build a $10 million bagging facility at the port. It quickly outgrew that space and expanded only to outgrow that space, too. That led TCI to lease a second space at the Port of New Orleans that has since maxed out capacity. It’s now in negotiations to open a third and larger space to handle anticipated growth.

The growth in industrial movement has been matched by an increase in commercial operations, as well. The port operates two terminals that are home ports to four cruise ships – two Carnival Cruise Line ships, one Royal Caribbean International and a Norwegian Cruise Line ship.

“We are in the stages now of engineering and design for a third cruise ship terminal,” LaGrange says. “It will be a $35 million dollar project, and we are looking forward to that because we have four home cruise ships now and this will allow us a fifth and sixth to serve as their home port year round.”

The Port of New Orleans focuses on the now while keeping a firm eye on the future.  A growing concern of environmental sustainability has motivated the port to continue its progress in a greener direction. The port entered into a landmark agreement with the University of New Orleans Maritime Environmental Resources and Information Center to promote green business practices by benchmarking energy efficiency, water quality and land use remediation.

“Because of the rapid land loss we’ve had through coastal erosion over the last couple of years, we are advocating the deepening of the Mississippi river to 50 feet,” LaGrange says. “The initial dredging of the channel to 50 feet would have an 89.4-to-1 cost benefit. And it also ties into the environment. With the sediment that would be generated through dredging each year, it can create 275 acres of wetland in the marshes of coastal Louisiana.

“Everybody is striving for sustainability,” LaGrange continues. “No matter what category or industry you’re in, every move is going in that direction and we think it’s an excellent move.”