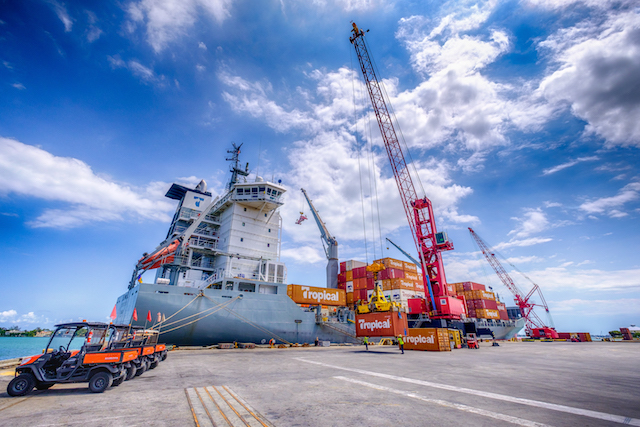 The Port of Palm Beach is seeing a boost in passengers and shipping.

With an operating schedule of 24-seven all year long, the Port of Palm Beach needs people it can rely on to get the job done. Port Director Manuel Almira asserts that the Riviera Beach, Fla.-based port has assembled such a team, even in the aftermath of crises like hurricanes.

“I’m very proud of the fact that our folks are ready, willing and able to come in,” he says. “Our staff will go out there and clean debris without any hesitation.” 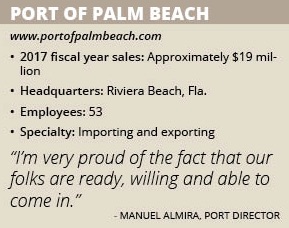 The Port, which is located 80 miles north of Miami and 135 miles south of Port Canaveral, originally started operations in 1915. Today, it stands as the fourth busiest container port in its state, with three slips, 17 berths and seven roll-on/roll-off ramps.

“For something that is over 100 years old, we’re doing just fine,” Almira says. “We are what is called a major financial powerhouse in Palm Beach County.”

The Port’s largest focus, he notes, is feeding the Caribbean through its No. 1 tenant, Tropical Shipping. The company meets its clients’ freight shipping needs and provides service through the majority of the Caribbean basin.

Because the majority of the islands do not have the infrastructure to develop massive amounts of food to feed locals and tourists, “Most of those businesses turn to the United States,” Almira says. “We have seen the volume of food increase to meet local consumption demands.”

Port of Palm Beach recently signed a long-term contract with Tropical Shipping to enhance its ability to handle refrigerated containers containing food. As part of that agreement, the Port will soon demolish an office building and convert the space into a refrigerated container pad with a 140 percent increase in reefer plugs.

This will allow containers to be loaded onto the pad so they can plug into power sources and maintain products at their required temperatures. But that is not the Port’s only construction project, Almira asserts.

“I have looked at the future,” he says, explaining that he believes that rail use will increase as heavy traffic becomes even more prevalent. This puts the Port of Palm Beach in an enviable position, he notes, since it has its own rail and rail staff that can pick up containers.

The Port has plans to invest more than $8 million to modernize some of its rails, which date back to the 1950s, and add additional capacity. The Port itself has generated $4.2 million of the funds, but the other half has been awarded by the Florida Seaport Transportation and Economic Development Program.

“The grant is awarded knowing you have to come up with 50 percent,” he says, noting that this will provide clients with a “faster, cleaner and more efficient way of transporting goods.”

A longtime veteran of the transportation industry, Almira took his role at Port of Palm Beach 10 years ago. He notes that the industry is seeing many changes, including an increase in vessel sizes.

One tenant, Bahamas Paradise Cruise Line, previously utilized a ship with a 1,350-person capacity, but has added a larger vessel that can carry up to 1,850 people. “That meant for us that we have to accommodate a larger ship,” Almira says.

Tropical Shipping also has informed the Port that it will be adding six larger ships to its fleet. “We will have to work on accommodating those vessels and a greater number of containers,” he says.

This can be challenging for the Port, which only spans 162 acres. “We’re not the 2,500-acre ports out there,” he admits. “We’re in the middle of two cities and we essentially play with the hand that we are dealt.”

Fortunately, containers can be stacked and the Port is in the process of acquiring more land. “We just have to work out the details of zoning changes with the city,” he says. “In the month of September, we’ll be able to put the final ink on the contract.”

Almira sees more growth ahead for Port of Palm Beach. Recently, it has had more than 370,000 passengers annually, but he expects that number to grow by three to five percent in the coming years.

As consumers have enjoyed an increase in disposable income, “Folks tend to enjoy one or two vacations per year,” he says, noting that the Port will make sure the cruise companies have the right support. “It’s up to us as a port authority to make sure they have the space to grow.”