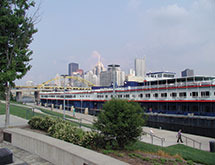 For nearly 200 years, the city of Pittsburgh has served as the important crossroads for the Allegheny, Monongahela and Ohio rivers. “More than 20,000 barges annually [come through],” Steve Martinko says. “We are truly the cradle of the American inland river commerce.”

Martinko is the executive director of the Port of Pittsburgh Commission, an independent agency of the commonwealth of Pennsylvania. Founded in 1992, it serves a 12-county port district.

“Our mission is to promote the commercial use and development of the inland waterway intermodal transportation system and to integrate it into the economic, recreational, environmental and intermodal future of the region in southwestern Pennsylvania,” Martinko says, noting that has a staff of five associates.

He took his role at the port this September after working in Washington, D.C., for the past 12 years. His tenure in the capital included serving as the deputy staff director of the U.S. House of Representatives Committee on Transportation and Infrastructure.

Martinko also was the House negotiator on the Water Resources Reform and Development Act of 2014. The act focused on “the legalization to authorize investment in ports and waterways, which are very connected to the work that we do here at the commission,” he explains.

Since joining the port, Martinko has focused on its infrastructure. “We’re very unique in the number of locks and dams,” he says. “Keeping them in good condition in and taking care of them is a top priority.”

This can be challenging, particularly with funding issues and the age of the infrastructure. “We have some of the oldest locks and dams on the inland waterway system dating back to the 1920s and 1930s,” he admits.

“The importance of improving those comes back to funding,” Martinko continues. “That’s probably our biggest challenge – addressing those needs in a constrained environment.”

But the Water Resources Development Act should provide some money for the projects, including the improvement of the Monongahela River Locks and Dams 2,3, and 4 Project (Lower Mon). Also on the agenda is pursuing authorization from Congress for proposed improvements of the Emsworth, Dashields and Montgomery locks and dams on the Ohio River.

“We’re working hard as a region and as a consensus to show the importance of these projects to Congress,” Martinko says.

Not only will the projects improve the infrastructure, it will add jobs and give a boost to the economy. “We’re showing what those investments mean to the region,” he says.

Ready for a Renaissance

Pittsburgh is experiencing an industry and energy renaissance, Martinko says. Shell Oil Co. announced plans to build a multimillion-dollar cracker facility along the city’s riverfront, and others have shown interest, as well.

What makes the locations on the rivers ideal is the cheap shipping by barge, Martinko says. “We may not be fast, but no one can compete on costs,” he says.

The city’s renaissance also includes a focus on the environment as the port works with river carriers to reduce their emissions. Thanks to EPA’s Diesel Emissions Reduction Act, “We secured $1.1 million to upgrade engines for more fuel efficiencies and lower emissions,” he says.

Private investors also provided $2.6 million in matching funds. So far, with the funds, “We’ve completed a total of five vessels that will reduce fuel consumption by 1.6 million gallons over the life of the engines,” Martinko says.

The port also secured $10.5 million from the U.S. Department of Transportation’s Congestion Mitigation Air Quality Improvement program, which was matched by private investors. “Over the next three years, we’ll do 29 vessels,” he says. “Both of our programs are a win-win.

“We’re very proud of fulfilling multiple roles in our missions,” Martinko says. “It’s important to balance commerce and the environment.”

It is an exciting time for the port, Martinko says. “We continue to play a key role in why commerce continues to stay here,” he says. “The annual economic benefit to the region of the port is over $800 million, and the future is very bright.”

He adds that the commission hopes the port’s tonnages will continue to increase, and plans to play a continuing role in projects. “In addition to our maritime activities, we have a number of economic development tools, such as conduit financing authority,” Martinko explains. “We’re also interested in playing a larger role in economic development by attracting businesses and growing the region.”