As the shipping industry begins to make changes in compliance with the Government’s Maritime 2050 strategy, one of the biggest difficulties facing businesses is the challenge presented by sustainability. For an industry still heavily reliant on fossil fuels, the Government’s plans for zero emissions shipping in the UK by 2050 seem highly ambitious, but ferry operator Red Funnel is already playing its part.

“I think our commitment to an environmentally sustainable operation is clear,” says CEO Fran Collins, a sentiment supported by the vast amount of 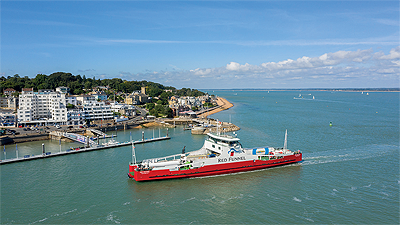 public recognition the operator has recently received. In 2019, Red Funnel won the Maritime 2050 Award, was awarded a Gold Star certificate by Visit Isle of Wight for its work promoting the use of sustainable transport, and was nominated in the Green Initiative Award category of the 2019 IW Chamber Business Awards.

Despite the plaudits, Fran, who was awarded the Merchant Navy Medal for Meritorious Service in 2019, says that Red Funnel’s work is about much more than winning prizes. “We’re very privileged to have won the awards, but our motivation is more than recognition; it’s about doing the right thing to support the Isle of Wight and the Solent, both now and into the future.”

After launching its Red Goes Green campaign at the end of 2018, Red Funnel has undertaken a number of measures to make the organisation more environmentally friendly, and continues to do so today. “Some of the changes are fairly small scale i n nature, such as ensuring we work to eliminate single-use plastics across our business,”

Fran explains, “but others have wider implications, such as our anti-idling campaign.” Clean air is a priority for Red Funnel, and the operator recently trialled the use of a bio-fuel equivalent in Red Falcon, a member of its fleet.

In order to comply with environmental targets, Red Funnel is currently looking into replacements for three of its vessels. Fran says sustainability is at the heart of this process. “As we start to consider replacing the vehicle ferries, ensuring that they are built in the most sustainable way and with the potential to operate on an emissions-free basis is a fundamental part of our research.”

Red Funnel has a long history of transporting passengers, cars and cargo between Southampton and the Isle of Wight, and the last three years have seen the operator introduce three new ships to its fleet. Hi-speed catamarans, Red Jets 6 and 7, joined in 2016 and 2018 respectively, and most recently, Red Funnel awarded a £10 million contract to Birkenhead based shipbuilder Cammell Laird, to build its new state-of-the-art, freight-only ferry, Red Kestrel. “The first of her type, she’s a 74m double-ended RoRo (roll on, roll off) with capacity for 12 trailers,” Fran explains. “This frees up enough space for around 100 cars on our vehicle ferries, which means we can offer better options and wider choices at peak times for both freight and car passengers.”

Of Red Funnel’s existing fleet of seven ferries, six have been built in the UK. The operator continues to support British shipbuilding and is also helping to keep maintenance jobs in the UK, having recently signed a three-year agreement with A&P Falmouth to service its vehicle ferries for routine maintenance.

Since the introduction of its new catamarans, Red Funnel has seen good growth in traffic levels and market share. The addition of Red Kestrel has 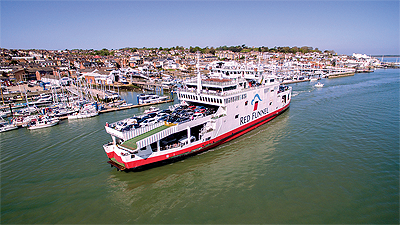 sparked similar steps up in private vehicle and freight market sectors. Over the last three years, Red Funnel’s capacity has increased from three million to 3.4 million, and punctuality has improved to 94 per cent. Fran suggests the operator is already reaping the rewards of the investment it has made in its fleet. “These new vessels have complemented and expanded our service well and we continue to see the benefits from our focus on delivering great customer service.”

Landside, Red Funnel completed an interim upgrade to its East Cowes site in 2018 and is now preparing to start construction of the main scheme, which will include a bigger and more suitable marshalling yard and better terminal facilities. “The scheme will greatly improve access to and from the port,” Fran says, “as well as minimising the effects of traffic on the town.”

It is clear from talking to Fran that, despite the ongoing changes and developments, customer satisfaction remains at the core of everything Red Funnel does. “Customer service is something that we take extremely seriously,” Fran states. “We pride ourselves on ensuring that we give our customers what they want.” Red Funnel’s latest customer satisfaction score of 8.6/10 suggests that the operator is doing just that, but Fran makes it clear that the company is not resting on its laurels. “Our customers told us that they comwanted better choice and wider retail offerings,” she explains. “As a result, we’ve recently announced a partnership agreement with Sainsbury’s, which will be rolled out across our locations in the spring of 2020.” Fran is quick to allay any fears customers might have about changes this may cause to Red Funnel’s current menu. “Don’t panic,” she says, “the Red Funnel big breakfast that our customers know and love will still be available!”

Looking ahead, Fran expects 2020 to be a very interesting year for Red Funnel. “We are into a period of delivery now,” she says. “We’ve set our big projects in motion and we have a roadmap of things to complete.” Alongside the new retail offerings and developments of landside infrastructure, the operator has added a number of vastly experienced industry professionals to its leadership team. This experience will, no doubt, prove invaluable as Red Funnel continues to lead the shipping industry’s march towards sustainability. Fran hopes that businesses can work on the issue collaboratively, and look for long-term solutions, rather than a quick fix. “It’s an exciting time in shipping,” she says, “but we have to ensure that the industry doesn’t see sustainability as a competitive decider, but as a responsibility for us as a whole.”

For Red Funnel, Fran believes the vision is clear. “We’ll continue to serve the Isle of Wight to the very best of our abilities and provide a level of excellence that our customers Funnelexpect.” One thing that won’t change in the coming years is the operator’s long-standing commitment to its home on the south coast. “We have a few challenges coming up,” Fran says, “but we’ll still be supporting the Solent in every way we can.”