Back to Features > Solving Challenges 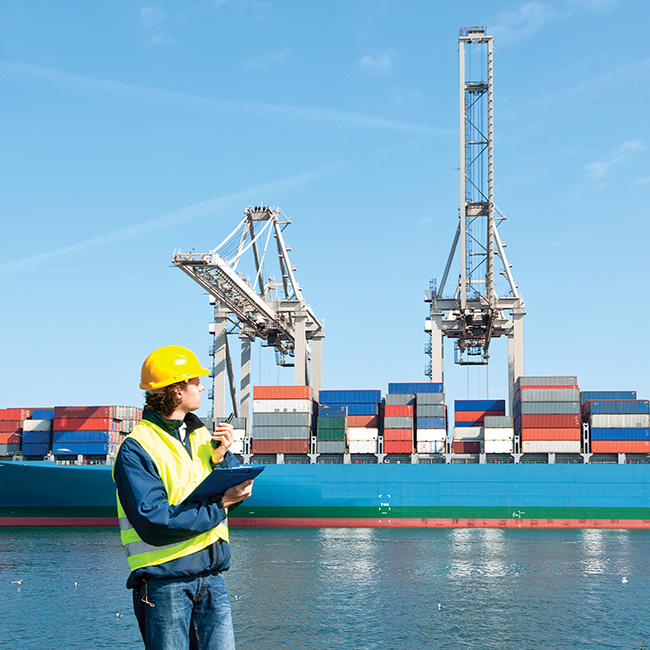 According to the International Chamber of Shipping, approximately 90 percent of the world’s trade is carried by more than 50,000 merchant ships transporting every kind of cargo. This makes seaports vital to – and the focal point of – the flow of commodities and capital worldwide.

This places immense pressure on seaport operators to manage the myriad operational and security functions involved in the successful movement of cargo. The numerous workers, ships, containers, equipment and vehicles roaming this complex environment must be properly orchestrated to ensure the speedy flow of goods – and none of this happens without a reliable communications network.

Especially as automated applications grow in usage, it’s critical that seaport operators have a high-performing network – but many ports are facing mobility challenges that can impact operations if they are not resolved.

To optimize cargo movement, seaports employ a number of systems and technologies, such as Supervisory Control and Data Acquisition (SCADA), Radio Frequency Identification (RFID) and CCTV access control and monitoring, all of which generate volumes of valuable data that must be transferred via network infrastructure.

Having access to this critical information helps port officials, inspectors, employees and tenants perform their tasks more productively as they move around the seaport – but there are many challenges affecting current networks, including:

• Aging and/or outgrown wired infrastructure – Many seaport operations have expanded and outgrown the communications capacity of the wired network. Some infrastructure may have reached end-of-life, and the other components may simply not be robust enough to meet current demands.

• Large volume of containers – An enormous volume of containers is constantly moving from ship to shore and from shore to ship. As an example, in 2016 the Port of Los Angeles recorded 877,564 twenty-foot equivalent units (TEUs) flowing through its port in one month. Container movement can create additional interference and restrict signal range for many wireless communication systems because radio frequency (RF) waves cannot penetrate the metal containers, thus disrupting data flow.

• Security – The sheer volume of containers moving in and out of ports presents a security risk: Terrorists know that striking a port facility can significantly impair a nation’s economy, and criminals view containers as inviting targets for theft or smuggling.

• Harsh coastal environments – Weather and temperature extremes are common to seaport environments, and they can wreak havoc on wired and some wireless systems.

Being able to integrate automation into standard operations is becoming more important for port managers, who are always looking to improve overall productivity and reduce operating costs as well as ensure worker safety.

Using unmanned ground vehicles, automated guided vehicle control, autonomous equipment communications and unmanned aerial vehicles (or drones) gives ports the opportunity to streamline operations as well as improve safety when loading and unloading massive container ships. When software runs massive cranes, or when automated systems lock and unlock containers on cargo ships, there is less room for human error. Additionally, the human workers involved can be stationed in an operations center and away from the possibility of injury.

An obvious added benefit: More efficiency in getting cargo on and off ships waiting in port translates into more money saved for carriers. In many ports, human workers can’t keep up with the amount of cargo coming in, and as container ships get bigger, this problem will be exacerbated. Ports can preserve jobs while improving safety and productivity by pairing humans and robots to complete these tasks, allowing humans to perform higher-level work from offices or remote locations while robots handle the tough, dangerous manual labor.

The challenge that comes with these benefits, however, is that automation and the constant transfer of data it requires – especially when coupled with current applications’ network needs – will strain many ports’ networks.

What to Look for in a Network

Because of both traditional and newfound challenges, port operators are exploring new networks that can enhance operations and enable automation, and there are several key features to look for:

• Wireless – Many seaport operations have expanded and outgrown the communications capacity of the wired network. Wireless systems can be deployed more quickly and easily than wired systems, making them ideal for the busy, ever-changing port environment.

• Integrates into current infrastructure – Most seaport information systems have evolved over time into a complex, massive infrastructure that utilizes a wide variety of devices and technologies. IT managers need to be able to leverage legacy infrastructure, consolidate highly fragmented operations under one communications network and enable mobile access to mission-critical applications, so a wireless network must easily integrate into any current infrastructure a port wants or needs to keep.

• Scalable and reconfigurable – Containers, vehicles, workers and ships are constantly moving around a port. Standard design and equipment cannot support a port’s nomadic state, so a network should have assets that allow operators to reconfigure and move radios and network infrastructure as the environment changes.

For example, if sensors need to be placed on individual containers for tracking purposes, a scalable, re-deployable network makes it easy to move the containers on and offline, expanding and contracting the network as needed, while the network continues to operate with the same reliability. Shutdown should be limited to the initial installation, saving on the costs associated with downtime.

• Multi-frequency – Docking ships that use higher-frequency networks than the port can jam a port’s network. A network that uses multiple frequencies mitigates some of that interference, so the network stays up and running. A multi-frequency network also helps alleviate signal interference due to the metal containers; when there is enough equipment sending and receiving multiple signals at once, it ensures highly reliable connectivity, even if the signal must navigate around massive metal containers stacked 10 high.

• Military-grade security – Because of terrorist and cyber threats to the shipping sector, an airtight network is an absolute must-have to protect the supply chain. Networks with military-grade security and configurable per-hop, per-packet authentication are ideal for seaports. A network should offer end-to-end encryption – meaning when encrypted information flows through the network and comes out another radio, it stays encrypted all the way through and is not decrypted until it is delivered to its final destination.

• Overcomes environmental issues – While wireless networks offer the advantages of mobility without the limitations of wired infrastructure, the equipment must be battle-tested to perform reliably in the weather and temperature extremes.

• Supports real-time data – To enable automation as well as standard activities in a port, command and control centers require real-time information to direct the flow of goods, personnel and vehicles.

Seaports have three major priorities: taking cargo from ships, adding it to a database, and quickly moving it to wherever it needs to go next; managing all vehicles coming in and out and ensuring the right container gets on the right truck the first time; and ensuring all these operations remain highly secure and protected from hostile interference.

With the right wireless communications network, cargo managers can ensure the integrity of containers while moving cargo quickly, efficiently and profitably; and port managers can improve productivity and reduce operating costs while protecting worker safety.

Gary Anderson is senior vice president, business development, at Rajant Corporation, a private wireless network provider and mobile networking pioneer. He can be reached at ganderson@rajant.com.