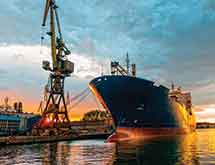 The South Jersey Port Corp. (SJPC) – which specializes in handling breakbulk and bulk cargo – is situated on the Delaware River with easy access to the Atlantic Ocean.

The Beckett Street Terminal and the Broadway Terminal, known as the Port of Camden, annually receive hundreds of ships moving international and domestic cargo through the port’s facilities. “In sheer tonnage, the South Jersey Port Corp. is one of the most productive ports in the world, and the economic impacts to the Delaware Valley region is significant,” the port says.

In the last 20 years, the SJPC has handled imported wood products and a growing array of steel products including coil steel, slabs, wire rod, structural steel and pipe.

“Shippers and customers look for well-maintained facilities, careful handling, competitive rates and reliable terminal and landside service that will speed their cargoes to their final destinations,” the port says. “The SJPC succeeds here on all accounts. We have expert labor, well-versed in the sensitive requirements of the cargo that moves through our terminals.” Direct discharge from vessel to railcars also is offered.

The SJPC’s terminals are open 12 months a year and service a growing number of steamship lines every week. “Whether it is providing on-demand inventory control services for cargo in the warehouse or expert crane services on the terminal, SJPC is striving to provide our industry with unparalleled, one-stop-shop services,” the port says. It offers customers short- and long-term covered and open storage opportunities and inventory control and logistic services.

At the Feb. 3 SJPC Board of Directors meeting, the agency reported its marine terminals had a breakout cargo year in 2014. Tonnage increased by 24 percent over 2013 to more than 2.2 million short tons. “This is the second consecutive year of achieving double-digit tonnage growth at the marine terminals in Camden,” the port says.

The rise in steel imports reflects a growing reliance on the SJPC’s marine terminals by shippers of steel from Europe to the American industrial heartland. “It’s a combination of the diminishing efficiency of the Saint Lawrence Seaway to the Midwest and the SJPC having the right facilities, skilled staff and rail and highway infrastructure to move these high-quality rolls of steel quickly, timely and in the most cost-effective manner,” Castagnola explains.

The SJPC also leases property within the port district to more than 35 tenants involved with waterborne cargo and the maritime industry. It has a network of tenants, private businesses and public and private facilities that creates a powerful economic engine in the south Jersey and Delaware Valley regions.

“Today, the port corporation remains focused on the changing trends of the maritime industry, the needs of its host city, and a future that holds the promise of accomplishments equal to and greater than those of the past three decades,” the port says.