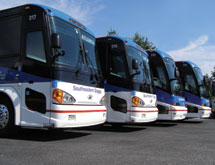 A few inches of ice and snow may not stop traffic in Colorado where Brian Parker hails from. But in Georgia and the Carolinas, where Parker’s employer, Southeastern Stages Inc., operates, all of the company’s routes were shut down twice within two weeks in February until the emergencies were over.

“We ceased all operations about 10 or 12 hours before the bulk of the storms started,” Director of Development Parker remembers. “We tried to be somewhat proactive. We got a hold of all our drivers and got them to their destinations. Essentially, we did not start any new schedules.”

During normal operations, Southeastern Stages Inc.’s fleet of 45 motor coaches carries 350,000 passengers annually on scheduled service from Atlanta to Augusta and Savannah, Ga.; Columbia, Charleston and Myrtle Beach, S.C.; and Fayetteville and Asheville, N.C. All those areas were affected by the unusual winter storms that in many cases layered inches of snow on top of a few inches of ice.

The last time winter weather affected the company’s operation was four years ago, Parker recalls, but a more usual use of the company’s disaster protocol is for hurricanes or tornados. “We have a protocol we follow depending on the type of incident we’re dealing with,” Parker says. “A certain amount of flexibility has to be written into that plan because every event is unique.”

Before the snow and ice storms, Southeastern’s motor coaches had been operating throughout the Southeast. So Parker stationed some in covered facilities at the company’s hubs in Atlanta and Columbia, as well as at a remote driver accommodation facility in Fayetteville. Fortunately, due to above-freezing weather following the storms, the ice and snow were gone within a few days and normal operations were resumed.

Southeastern Stages’ fleet travels nearly 3 million miles annually. All of the company’s motor coaches are routed so that they usually return with passengers to the company’s headquarters in Atlanta and its six-bay maintenance facility twice weekly. There they are inspected and any required maintenance is performed, such as oil or fluid changes or more complicated procedures.

“In some cases, it is hours, sometimes days on a major service,” Parker points out. The buses last an average of six to seven years and travel from 800,000 to 1 million miles during that time. “Quite honestly, for a lot of people, that’s a lot of miles, but 1 million miles for a commercial motor vehicle is just getting warmed up,” Parker maintains.

Southeastern Stages has a young fleet of 45 motor coaches. Of the 55-passenger coaches, most are from 2010 and newer. “We try to acquire a small number of new vehicles every year,” Parker says. They have the latest features for customers including Wi-Fi, power recharging outlets, seatbelts and wheelchair lifts. The charter buses also have DVD players and monitors.

An important customer benefit not all competitors offer but which Southeastern always has are bus stations, convenience stores or retail outlets where customers can wait for their motor coaches. “Our customers certainly appreciate having a place to wait or be delivered to, as opposed to just a corner or a sidewalk with no services or facilities whatsoever,” Parker points out. “There’s nothing quite so unsettling as being left in the middle of an intersection at 3 a.m. with rain or snow or ice coming around you.”

Onboard technology for drivers includes telematics systems with GPS that indicates speed, direction and location, and video that can be viewed live to aid in incident investigations. Each Southeastern Stage motor coach is also equipped with built-in safety features, such as automatic traction and electronic stability control and fire suppression systems. The company just added its first two vehicles with adaptive cruise braking systems developed by Bendix. All of Southeastern Stages’ drivers are also using electronic logs to manage their hours of service.

Founded in 1933 during the depths of the Great Depression by three smaller regional motorcoach companies, Southeastern Stages’ employees and key vendor partners celebrated the company’s 80th anniversary last year by attending an Atlanta Braves baseball game. “What’s most important to us is our focus on safety and service and our legacy – that commitment remains strong,” Parker emphasizes. “We owe a debt of gratitude to those who came before us and a responsibility to those who will follow after.”