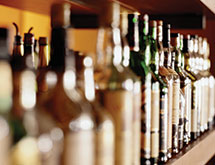 If you want something done right, you have to do it yourself. That’s the advice Southern Wine & Spirits took to heart several years ago when it overhauled the management of its massive nationwide supply chain. According to Vice President of Supply Chain Services Larry Sullivan, this was no small task, given that Southern Wine & Spirits is the nation’s largest wine and spirits distributor.

However, the efforts made by the company over the past six years have paid off in a supply chain that is safer, more efficient and more productive than ever before. Considering how many retailers nationwide depend on Southern Wine & Spirits to keep their shelves stocked for customers, this has been a major improvement for the company and its customers.

A privately owned company headquartered in Miami, Southern Wine & Spirits supplies retailers in 35 states with a wide assortment of alcoholic beverages. When Sullivan joined the company 10 years ago, Southern Wine & Spirits outsourced the management of its fleet. However, with the rapid growth the company has experienced over the last 10 years, Sullivan says it decided it would make more sense to bring all of its fleet management operations in-house.

Although doing so was a massive undertaking, Sullivan says moving fleet management in-house was an upgrade for Southern Wine & Spirits. By offering its drivers a better experience and its customers more customization, the company has solidified the foundation for its continued success.

One of the biggest changes to result from the shift to in-house fleet management involved the equipment, Sullivan says. Before the change, the company used the same model of truck in every market. Because the driving conditions can be vastly different from market to market, Southern Wine & Spirits developed a specific set of criteria for each market to allow the company to choose the right truck for each situation.

The company also examined what its drivers needed to create a more comfortable and safe driving environment and selected equipment based on those criteria, as well. The changes range from air rides for a smoother ride to orange seat belts for enhanced visibility. Driver retention is very important for Southern Wine & Spirits, and so it has done everything it can to ensure they have the best equipment possible. “We’ve changed a million things in the trucks,” Sullivan says. “We wanted to provide our drivers with the safest, most productive equipment at the lowest possible cost.”

In addition, the company has hired two full-time safety and compliance professionals to monitor the fleet and ensure the company puts vehicles on the road that are always safe and productive.

Along with the benefits in terms of equipment and driver retention, taking fleet management in-house also has made it easier for Southern Wine & Spirits to provide customized service to its customers. Unlike many other industries, alcoholic beverage distribution is complicated by the fact that the product cannot travel across state lines, and each state has its own regulations regarding liquor licenses. In New York, for example, no single entity can have more than three licenses, meaning Southern Wine & Spirits has to make far more deliveries than in California, where it can deliver huge orders to customers’ distribution centers to be dispersed to individual stores.

By building its fleet to meet the specific requirements of each market, Southern Wine & Spirits now has the ability to provide more specialized service for customers. “Based on the needs of the market and what we do, we customize the equipment for them to meet the requirements,” Sullivan says.

Southern Wine & Spirits also took the opportunity to consolidate its contract maintenance from 31 providers to a single source. Sullivan says this means the company can receive consolidated information about the maintenance of its fleet, something that was prohibitively complicated under the previous system. That means Southern Wine & Spirits has up-to-the-minute information about the condition of its equipment, making procurement easier to plan.

Southern Wine & Spirits’ customers see their delivery drivers more often than any other representative of the company, making them the most important connection the company has with customers. By making the transition to a private fleet, Southern Wine & Spirits not only has improved the service it provides to its customers, but also the service it provides for its employees. As the company continues to grow across the United States, Sullivan says, handling its fleet in-house will prove to be one of its greatest strengths.