Skip to content
You are here:Home » The Port of Palm Beach
Shipping Insights
5 min read 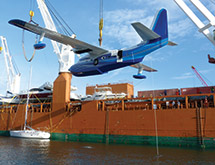 With a legacy that stretches back for a century, the Port of Palm Beach continues to demonstrate how to efficiently operate a port while looking for ways to improve its infrastructure. Chartered in 1915, the port is based in Riviera Beach, Fla., about 80 miles north of Miami and 135 miles south of Port Canaveral. The Port of Palm Beach is ranked as one of the top 20 ports in the United States, operating on revenue earned by its tenants.

“Like all ports, we are always faced with cost challenges around capital improvement,” Executive Director Manuel Almira says. “But we are a very efficient port and have been able to make infrastructure improvements.”

Efficiency is one of the port’s key attributes. Ships enter the port through an inlet channel that is 400 feet wide and has no aerial obstructions. The port operates out of 162 acres, which is relatively small compared to many ports. But it has still posted numbers such as moving 250,000 20-foot equivalent units per year.

Almira says much of the reason for the efficiency at the port can be attributed to its relationship with Tropical Shipping, a the leader in container and ocean transport services to the Bahamas and The Caribbean for more than 40 years.

Almira says the port also closely monitors metrics such as revenue per square foot and berthing occupancy and utilization. Key performance indicators in those areas help the port determine its strategic direction.

Finding ways to fund capital improvements has also been a major focus for the port as it looks to maintain and expand its facilities. The port has been renovating sheet piles as part of a $26-million restoration of Slip 3, which was scheduled for completion by mid-August. The effort includes replacing the sheet pile to shore up the perimeter of the slip while adding two roll-on/roll-off ramps.

“The walls on that berth were more than 50 years old and had exceeded their life expectancy,” Almira says. “We now have a brand new slip that will last for the next 50 years or so.”

Florida Department of Transportation partnered with the Port of Palm Beach on the project. The state provided a $20 million grant, with the port covering the remaining $6 million.

“Financing was the biggest hurdle, but we worked with FDOT to move other approved port projects to the backburner and move the funding for those projects to the Slip 3 project,” Almira says. “We also had to maintain an open berth while the project was going on, so we always had to know where the next ships were and when they would come in.”

The port also has plans to create a new, smaller berth immediately to the south of Slip 3. Almira says there is 200 feet of available space the port can use to accommodate smaller vessels that can operate on a roll-on/roll-off ramp.

There are other areas where the Port of Palm Beach is looking to expand and improve operations so it can maintain current business while also looking to bring in potential new business. Dredging around the port is one area of interest, as the challenges such as the 400-foot-wide entry into the Lake Worth Inlet, the push of the near-shore current, a tight left turn as the channel narrows from 400 feet to 300 feet, and a shallow area in the turning basin near the cruise ship berth all present navigation hurdles.

“By last fall, the channel entrance had shoaled up to about 28 or 29 feet, and we knew we needed at least 30 feet to accommodate the new Grand Celebration passenger vessel, as well as sugar shipments,” Almira says. “We worked with the Army Corps of Engineers and the state Department of Transportation to solve that immediate problem, but getting all the rest done requires working through some issues.”

Looking ahead, the port is closely monitoring trends that could impact its business. This includes high demand for steel and construction materials, as well as the changing relationship between the U.S. and Cuba. The Port of Palm Beach has already proven that it can be a significant player in the cargo and cruise business, and it is confident that it can continue to stand out.

“We believe there are opportunities to add a lot of volume to the port,” Almira explains. “As ports grow, they face capacity issues, so we have to make sure we are working at maximum efficiency so we can best serve tenants and grow our business.”