Skip to content
You are here:Home » The Port of Virginia
Freight Shipping Insights
5 min read 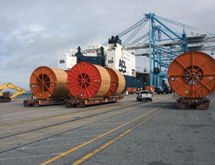 Ever since the Virginia Port Authority was established as an autonomous agency of the Commonwealth of Virginia in 1952, it has focused on developing, improving or increasing the commerce of the ports of the commonwealth. In 1981, the commonwealth created Virginia International Terminals Inc., a non-stock, nonprofit affiliate of the Virginia Port Authority. Virginia International Terminals was created to operate the Port of Virginia, however the operation has been restructured and everything now falls under the VPA flag.

“In the past, the individual ports were owned and operated by their respective city governments and they were competing for business and state funds,” Media Relations Manager Joe Harris says. “The governor believed a single entity would be stronger, and ultimately everything fell under the Virginia Port Authority.”

The Port of Virginia’s main facilities are four marine terminals, an intermodal container transfer facility in northwestern Virginia and a barge port in Richmond: Norfolk International Terminals, Portsmouth Marine Terminal, Newport News Marine Terminal, APM Terminals Virginia at Portsmouth and the Virginia Inland Port, an inland intermodal facility. The marine terminals are all located in the harbor of Hampton Roads, while Virginia Inland Port is located at Front Royal. The VPA also manages The Port of Richmond, a barge terminal on the James River.

The Port of Virginia strives to protect and enhance the supply chains of some of the world’s leading employers by helping to ensure the efficient, cost-effective and reliable movement of ocean freight for importers and exporters. Its facilities mainly handle import and export containerized and break-bulk cargoes.

“Our facilities all work in concert to move cargo through the port,” Harris says.

Among its many strengths is a 50-foot shipping channel, the deepest on the East Coast. This depth means the Port of Virginia is already prepared to serve the 10,000+ TEU vessels that will become commonplace once the Panama Canal expansion project is completed in 2015.

“With the deepest ice-free harbor on the East Coast and channels coming in and out of harbor that are 50-feet deep, we can handle the biggest ships on the water,” Harris says. “We also have no overhead obstructions and are within a day’s drive of two-thirds of the U.S. population. These are genuine geographic advantages.”

In addition, more than 30 international steamship lines service the Port of Virginia. Norfolk Southern and CSX offer on-dock, double-stack intermodal service to key inland markets in the Midwest, Ohio Valley and the Southeast, and The Port of Virginia maintains ISO 9001 and 14001 certification.

“We have CSX and Norfolk Southern rail access inside our gates,” Harris says. “And the APM Terminals Virginia at Portsmouth is among the most technologically advanced marine cargo facilities in the world.”

One of the realities of the maritime shipping world is that cargo flows along economic lines. The Port of Virginia understands that its customers need value, efficiency, reliability and service from their port partners. Because of that, the Port of Virginia strives to be responsive to customer needs.

“Ocean carriers that operate large vessels need their ships to be maxed out to make money,” Harris says. “Because of our facilities, they can maximize the use of their vessels and the economics work. But we’re still small enough that our leadership can be accessible to clients. We have a genuine focus on customer service.”

Although the Port of Virginia already has many pieces in place, it still looks for ways to improve its capabilities. In the last few years, it renovated Norfolk International Terminals, which is home to 14 of the biggest, most-efficient cranes in the world. As part of the recent renovation, Norfolk International Terminals had its container yard reconfigured. Now, its truck gates are being redone, and its 89,300 feet of direct rail access will soon connect directly to the Commonwealth Railway Project.

“Most of the big infrastructure investments to the Port of Virginia have been made, but we are looking at every detail of each terminals to find any gaps in our operations,” Harris says. “For example, 35 percent of our cargo volume is moved by rail and we think it can be higher, so we need to expand our rail capabilities. We are also talking about dredging our depth to 55 feet when needed.”

The Port of Virginia has also been responding to the fact that many large manufacturing, warehousing and distribution centers have been setting up shop in and around the port. Its efforts to expand its rail network and improve its operations are focused on helping those organizations to succeed.

Another coming change is the implementation of the Navis N4 terminal operating system. The system will provide the port with a unified and integrated IT strategy that can better support the port’s growth while reducing operational overhead across multiple sites.

With its geographic and manmade advantages, the Port of Virginia is in position to remind its customers and the world that it is already prepared to handle the biggest ships on the market. As other ports on the East Coast play catch up with renovation projects, the Port of Virginia will already have had the opportunity to build and expand relationships.

“We can showcase the service we provide and demonstrate that we are an economical choice for moving cargo,” Harris says. “We will also be integrating the Virginia Port Authority and Virginia International Terminals so we can be more efficient and nimble.”