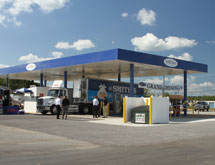 There are many companies in the compressed natural gas (CNG) fueling products market, but TruStar Energy stands above them thanks to its extensive background in the trucking industry, Vice President of Sales Scott Edelbach says. “That’s an advantage for us that resonates with our customers.

“Our approach to designing and building CNG fueling infrastructure revolves around our in-house teams of professional engineers [PEs] and construction crews,” Edelbach says. “That means we don’t have any delays due to miscues between subcontractors. It also means we can build the stations faster – which allows our customers to take advantage of lower-cost CNG fuel faster.”

Previously, Edelbach and other core members at TruStar Energy worked for McNeilus Truck and Manufacturing Co., “one of the early adopters of integrating CNG fuel systems into their garbage truck bodies,” Edelbach says. When Edelbach and Lucero started Vocational Energy (which eventually became TruStar Energy after the acquisition by Fortistar Energy Group in January of 2013), they initially focused on serving the refuse and construction segments.

Today, TruStar Energy serves customers from a variety of different market segments, Edelbach says. “What we’re seeing now is a broader acceptance of CNG as a vehicle fuel by various trucking-related market segments,” he says, noting that these include beverage and food distribution, and those that move their products to market by truck fleets.

TruStar Energy has built more than 60 stations since 2009. Edelbach says the company works closely with clients to find out their specific needs for each station – from how they fuel to the specific location of fueling equipment.

Some companies have had TruStar Energy build and operate stations for them. “We’ve developed a lot of programs for our customers to take part in that energy independence dream,” he says.

TruStar Energy educates its clients about the benefits of CNG as it works with them, Edelbach says. “At the end of the day, we want to make sure we have alternative fuel/CNG advocates as our customers,” he says.

Customers often view their use of CNG gas as a way to lessen reliance on foreign fuels. “We have built stations for guys who say, ‘It’s not just green, it’s red, white and blue,’” Edelbach says. “They understand it.”

TruStar Energy’s business is challenging on a daily basis, Edelbach admits. Any station build can encounter issues, ranging from weather, to permit delays, to appearing before city councils to educate and dispel fears and misinformation pertaining to the industry. “There’s a myriad of potential issues that can pop up at any given time,” Edelbach says, adding that TruStar Energy copes by taking on each project “with our eyes and ears open and addressing each issue as they arise. It’s all part of the job.”

TruStar Energy will continue growing as new consumer CNG vehicles enter the market. Last October, Chevrolet introduced the 2015 Impala bi-fuel sedan, which can run on both CNG and gasoline.

“We’re playing a lot of catch-up,” Edelbach says. [However,] we have the momentum going forward and I don’t see that tapering off any time soon.”