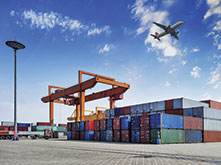 In the Tulsa Port of Catoosa’s first year of operation in 1971, the Oklahoma port handled 86,654 tons of cargo. In 2013, it handled more than 2.7 million tons. And as the transportation industry continues to divert truck and rail shipping to waterways, the Port of Catoosa only expects the number of cargo shipments coming through its port and 2,000-acre industrial park to grow.

“One reason is cost,” the port says. “It is estimated that bulk freight can be moved by barge for one-third the cost of railroad and one-fifth the cost of truck. Secondly, cargo that is too big or too heavy to be transported over the highways or by railroad is a perfect candidate for water transport.

“Equipment weighing more than 600 tons has passed over the Tulsa Port of Catoosa’s docks.”

Another reason for the port’s growth is the economy of scale it provides to shippers. A full tow to the Port of Catoosa consists of eight barges, lashed tightly together and pushed from behind by a single towboat. “With each barge holding 1,400 to 1,500 tons of material, a full complement of eight barges carries the equivalent of 480 semi-trailer trucks,” the port says.

Part of the System

The Port of Catoosa sits conveniently at the head of the McClellan-Kerr Arkansas River Navigation System. The system links the Port of Catoosa in Oklahoma to the surrounding five states via a 445-mile inland waterway that includes 18 locks and dams running along the Verdigris, Arkansas and White rivers and ending at the Mississippi River. Bulk shipments can head out of the Port of Catoosa, transfer to a port along the Mississippi or Ohio rivers and head to their final destinations without touching land in between.

“Cargo loaded in river barges in Catoosa can be transported via the Port of New Orleans to any seaport in the world, without touching land again,” Port of Catoosa says. “By heading north on the Mississippi and Ohio systems, ports as far away as St. Louis, Minneapolis, Chicago or Pittsburgh can be accessed.”

For shippers who do need access to roads and rails, however, Port of Catoosa provides that, as well. There are more than 60 industrial companies located at the Tulsa Port of Catoosa that employ 4,000 people. The port owns a 1.5-mile private channel that hosts its waterfront docks and terminals that make up its multimodal shipping complex.

The port owns three locomotives serving the terminals and 20 private industry spurs on its 12-mile short-line system. It also owns two switch-boats, which move barges between the docks and the fleeting areas along the port’s channel. These services are performed by the port’s contract operators, the Port of Catoosa Railroad and the Peavey Company. Inter-port drayage of break bulk cargo (especially steel) is offered by Tuloma Stevedoring, the port’s contract operator of the general dry cargo dock.

“In general, a shipper’s choice of modes is determined by size [weight and/or dimensions], value of the shipment and time requirements,” the port explains. “Tulsa Port of Catoosa logistics experts are always available to advise shippers as to which mode of transportation is best suited for their particular freight shipping needs and to furnish appropriate service provider information for each.”

The port hosts dedicated dry bulk, grain and bulk liquids terminals. It also has a roll-on/roll-off low-water wharf. The wharf is 180 feet long with a 50-foot-wide concrete apron and embedded railroad tracks. The wharf is used to transfer over-dimensional or overweight project cargo, such as giant processing equipment.

The port is investing to handle more shipments in 2015. In August, it demolished its original transit shed as part of its main dock project. This project includes a new, larger transit shed as well as dock resurfacing, more rail access at the main dock and a new 300-ton gantry crane.

“The ability to handle a wide range of commodities has always been the strength of the port,” explained David Page, chairman of the City of Tulsa-Rogers County Port Authority.

“Increases in shipping for both agricultural commodities and steel help illustrate the product diversity that has helped make the port and the McClellan-Kerr waterway such an important economic asset for the region.”