Skip to content
You are here:Home » Two ways that trentbarton is making Christmas the most wonderful time to travel
Insights 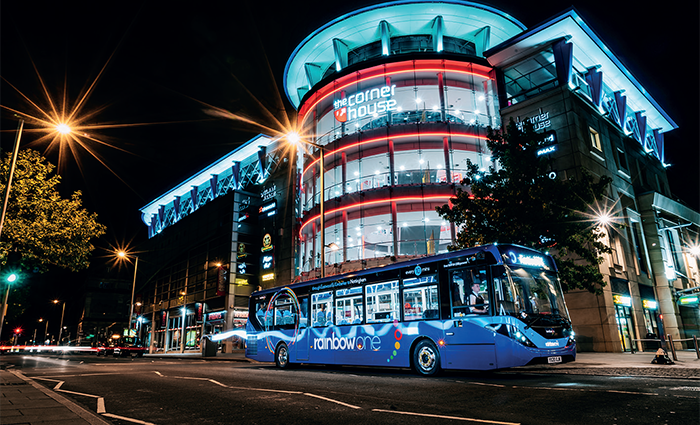 Exciting times are underway at trentbarton; the bus company that services Derbyshire, Leicestershire, Nottinghamshire and Staffordshire. In the lead-up to Christmas, the company is looking to support passengers in their shopping trips, while also pushing to help encourage the use of public transport during the festive season. “In the early 90s,” Group Commercial Director, Tom Morgan, begins, “the bus industry was in decline. The leadership team soon decided that they needed to ask people what they wanted from their bus services, and then effectively deliver on those requests. Although something like that might seem like common sense to you and I now, back then, it was quite revolutionary.” This was done as part of an overall rebrand, which eventually became referred to as the rainbow routes. “It was almost like a customer charter. Each route had a specified frequency, dedicated vehicles in the fleet, and dedicated drivers who received additional training to have their own customer service standards,” shares Tom. 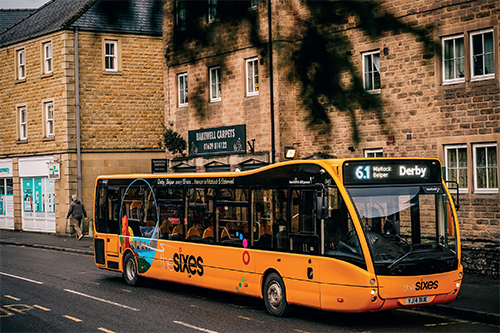 This strategy led to trentbarton developing its branding model. The company discovered that customers had a closer affiliation with specific branding than with a particular route number. Tom elaborates: “The branding developed and evolved to a point where rather than just using a route name, we rebranded the entire vehicle. Dedicated vehicles were different colors, and those vehicles were allocated a particular route. Drivers work the same routes, so that customers recognize both the vehicle and its driver. This has enabled a familiarity and rapport to develop between passengers and drivers, which in turn, has meant a greater affinity with the brand.”

Over the years, the company has continued to improve its service, and has subsequently become an integral part of the community. This is especially true over the festive season when trentbarton makes an impressive effort to ramp up the Christmas cheer. “It’s a busy time for us. Because we are a local bus company, we try to do a lot of community engagement. For example, we are supporting a local homeless charity by buying gifts and essentials, and donating them just before Christmas. Another initiative is our reindeer drive. Utilizing our red arrow-branded fleet, which runs between Derby and Nottingham, we have named each coach after one of Santa’s reindeer. We try not to take ourselves too seriously. We plan on putting little Santa hats on the logo, and our drivers volunteer to dress up as the man himself. We then do a ‘spot Santa’ competition: if customers get on a bus and Santa is in the driving seat, they can have their photo taken with him and enter into a competition to win a prize.”

While discussing how the company will be celebrating Christmas this year, Tom takes a moment to reflect on the year gone by. He emphasizes that the biggest challenge has been supporting customers as the travel industry returns to normal. “We lost a few great habits during the pandemic that we have had to force ourselves back into. For example, having our local teams out and about, and interacting with people, in a face-to-face environment, has been number one. I think during lockdown, people naturally became wary of each other, and there were lots of calls rather than direct in-person engagement. What we have just started doing is getting our local teams out and about, handing out customer rewards, and interacting with each other again. We jump on buses and hand out breakfasts as a way to delight our customers and say ‘thanks, we appreciate you using our services.’ We have always received an overwhelmingly encouraging response to acts like this.”

Furthermore, this engagement drive isn’t restricted to customers alone. Tom shares how in support of England playing in the World Cup, the company will be handing out cupcakes, decorated with the English flag, in its canteens. “We try to encourage a sense of camaraderie from both a customer point of view, and an internal one. The culture within the business is absolutely important because that is what’s reflected out on the road and in front of customers.”

Although 2022 has been a challenging year, Tom is optimistic the business will be coming out the other side stronger than before. “We have done a lot of work to adapt the business to the new normal. We have created a network that is suitable for the current level of demand, and for that expected moving forward, rather than persevering with pre-pandemic operations. This has resulted in some frequency reduction and service cuts, but we have gone through that process now and we are looking forward to stabilizing the network.” 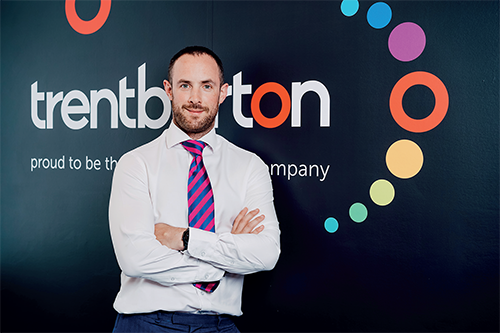 On that note, he is excited about the prospects of 2023. From his perspective, it will be a year of prosperity and success in making public transport a preferred option. “We will help reassure customers, and get them back to using public transport. We will also promote the social and environmental benefits of travelling by bus. Every journey that someone chooses to take by bus rather than by car can have an impact: not just on our customer base, but on other motorists and road users. There are numerous benefits to using public transport, from an environmental and sustainability point of view, as well as in terms of reduced congestion in our cities.

“We have always been quite an innovative business. We are not afraid to take a chance on technology and try to utilize it for improvement purposes. I think we are the only operator in the UK that has an app that uses account-based ticketing across a graduated fare structure, for example. It helps to remove some of the confusion surrounding ticketing. Customers don’t need to know the different fare scales for travelling from A to B, because the app will always charge them the best possible price. We want to make the experience simpler and easier for our passengers where possible, and with that, we will continue to innovate and make ourselves one of the best transport services in the UK,” Tom says. As Tom takes over as Managing Director from Jeff Counsell, who is retiring, we wish him and his team all the best in their endeavors in the new year.
www.trentbarton.co.uk