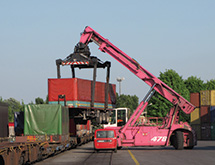 Vanguard Logistics Services has lived up to its name from its very inception, helping to create the non-vessel operating common carrier (NVOCC) industry as it exists today nearly 40 years ago. And Vanguard has continued to lead the way for the industry through expanding its reach even further throughout the world and continuing to invest in new technology to help its customers get their freight where it needs to be with the greatest efficiency and ease possible.

As one of the premier freight consolidators in the world, Vanguard’s presence is certainly impressive, with the largest network of offices and thousands of touch points all over the world. Regional Managing Director, North America Mike Meierkort says the slate of services Vanguard brings to its customers for their freight needs is comprehensive, and includes trucking, inter-point intermodal, warehousing, information technology and customs management.

The end-to-end services offered by Vanguard create a seamless experience for its customers, and in recent months the company has made efforts to make the way it presents itself to customers just as seamless. Through a major rebranding effort, Vanguard is consolidating all of the various brands under its umbrella into a single entity than Meierkort says will serve to bring more clarity to its global presence and strengthen its position as the worldwide leader. Paired with the company’s ongoing improvement efforts, Meierkort says Vanguard will emerge from the rebranding initiative even stronger than it was before.

With the sheer number of offices and warehouses it has around the world, Vanguard offers its customers a presence few of its competitors can match. “We are the largest neutral NVOCC in the United States as well as globally,” Meierkort says. “That’s definitely a differentiator – the size and scope of our operations.”

Of course, simply offering services is meaningless without the hard work of the people who make those services possible, and Meierkort says Vanguard is blessed with a network of highly skilled professionals around the world who carry out the day-to-day tasks necessary to fulfill its customers’ freight needs. “We have 3,000 people globally, 700 in the United States, many of whom have been with the company in excess of 15 to 20 years,” Meierkort says, adding that the longevity of its work force goes a long way to ensuring that Vanguard’s customers receive the highest level of service available.

“At the end of the day, we’re in a service industry,” he says. “We don’t manufacture a product, so our business is about customer service and building a relationship with our customers.”

Serving the freight forwarding industry brings with it a lot of competition, even for a company of Vanguard’s size and scope. “The biggest challenge is just the competitive landscape that exists in the market,” Meierkort says. “Customers are wanting more and more for less and less.”

Meierkort says Vanguard’s customer base of freight forwarders always are looking for new solutions to make them more efficient. “We do that be continuing to focus on innovation and by investing in technology to create efficiency for our customers,” Meierkort says.

Vanguard’s various software platforms make it one of the leaders in terms of technology in the industry, and include EDI visibility platforms such as Control Tower. Control Tower is a virtual hub that allows Vanguard’s customers to see their freight around the world in real-time, giving them the power to make up-to-the-minute decisions that gets their freight from Point A to Point B in the most efficient manner possible. Meierkort emphasizes that Control Tower is just one of the many platforms available to Vanguard’s customers, and this makes Vanguard unique among its competitors.

“We want to be better than our competitors, but we want to be different from our competition, as well,” he says, adding that the company’s stance on innovation is to be thinking of solutions to problems that its customers don’t know they have yet.

One of the main reasons why Vanguard has become a global leader is because of the company’s strong history of strategic mergers and acquisitions. By bringing other well-known and respected brands under its roof over the years, Vanguard has grown into the worldwide network its customers need. However, that growth strategy has created some challenges that Vanguard is working hard to address. “We’re essentially now more efficiently merging those various brands around the world so that we present ourselves to the market as an integrated company,” according to Meierkort.

Global Marketing Director Jennifer Henriksen says Vanguard was strong in communicating its value proposition internally, but externally presenting customers with numerous brands and watered-down messaging creates the potential for confusion. To address this, she adds, the company is investing in a number of major technology and marketing initiatives – including an updated company look and feel – designed to build a stronger, more cohesive feel to all of its operations worldwide.

Henriksen says the Vanguard story centers around the company’s prowess in LCL consolidation. Vanguard has built its network and infrastructure around this core strength, and Henriksen says the company has been finding new ways to leverage that strength over the past years, filling the gaps in customers’ logistics and getting freight to more places in the world, offering more direct routes, and shipping with greater frequency than anyone else. “The Vanguard network begins anywhere our customer’s network ends,” she says.

Streamlining initiatives like these have the potential to be a confusing and chaotic experience, but Henriksen says Vanguard has the internal strength necessary to keep efforts on track, and she credits the leadership teams within each department for providing the necessary input to ensure a smooth transition. “It’s a matter of providing the opportunity and creating a process for people to have input,” she says. “We have some of the greatest longevity in the industry with our employees, and one of the best things about working here is that everyone genuinely cares about the company and helping our customers be successful.”

The many strong advantages Vanguard has at its disposal will continue to serve it well as the company continues to find new ways to help its customers save money and become more effective. Meierkort says Vanguard’s global reach still has room to grow, and the company has its sights set on areas of the world it does not yet have a presence in, such as East and West Africa.

“We’ve got some strategic geographic expansion on the books down the road,” he says.