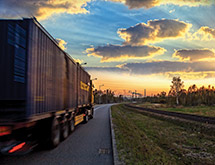 In the transportation business, reliability is crucial. Typically, reliability is defined by a company’s ability to deliver the same thing consistently. In world of transportation, however, reliability means a carrier can be counted on to change with the situation and deliver the same level of service no matter how much or how little they are called on to do. That’s a major part of the reason why Iowa-based West Side Transport has been a successful provider of full transportation solutions for nearly five decades. As COO Ron Joseph explains, the company has built a strong reputation for being able to deliver a high level of service and anticipate its customers’ needs well in advance.

The company has been serving customers since the 1960s, when it was founded by the Vogt family. Originally, the company’s focus was on salvaging grain spills at local train yards, and its equipment consisted of just a few trucks and some shovels.

Over time, the company evolved into a more complete provider of transportation solutions, and today West Side Transport provides regional and long-haul trucking services as well as brokerage and dedicated shipping.

Joseph says the competition West Side Transport faces today is varied and aggressive, with more savvy competitors out in the marketplace than ever before. No matter what, Joseph says, West Side Transport’s focus remains the same. “Our biggest strength is that we have a really refined internal customer service that focuses on finding the needs of the customers before they know what they are,” he says.

With that focus in place, West Side Transport expects to continue to hold onto its position as a leading provider of transportation solutions to mid-range customers. “Throughout the company’s history, providing outstanding service to customers has always been our focus,” the company says. “Many of our customers have been with West Side for many years and regularly comment about the quality of our personnel and the consistency of on-time pickups and deliveries. Today, we still make every business investment decision based on the question, ‘What would our customers want us to do?’”

Reacting to customers’ needs before they arise means having knowledgeable people in place, and West Side Transport is dedicated to ensuring it has the right people to serve its customers. Joseph says the company devotes a lot of resources to developing its customer service representatives and account managers, encouraging them to really dig into their customers’ businesses and find ways to serve them that they weren’t aware of before.

West Side Transport also gets its drivers involved in the process, Joseph says. The company recently instituted a survey among its drivers asking them to identify areas of customers’ businesses that could be improved from their perspective. Joseph says this has allowed the company to identify areas where its customers could make improvements to their transportation and logistics operations and find ways for West Side Transport to fix them.

Having the best drivers is another important element of West Side Transport’s success, and Joseph says the company is more aware of that than ever given the driver shortages facing the entire industry. “In today’s environment, it’s all about looking at driver satisfaction,” he says.

Driver retention is the greatest challenge facing the company today, Joseph continues, because the improving economy has created larger discrepancies in pay levels among competitors. Additionally, recent changes to the regulatory environment as it concerns hours of service and drug testing have made it more difficult for carriers like West Side Transport to select from a shrinking labor pool. Joseph says the company has followed the lead of many of its competitors in instituting a program to hire drivers right out of school with the intention of training them up through the company.

Joseph sees big things for West Side Transport, starting with opening more regional hubs. The company recently opened a new hub in Chicago as a base for 40 to 50 new trucks. From there, it hopes to open another in Minneapolis.

Creating a network of regional hubs will be critical to the company’s future because Joseph says it will need to create more daily routes and relays in order to attract and retain more of its drivers. “We believe that in five years, 80 to 90 percent of our drivers will need to be home every day,” he says.