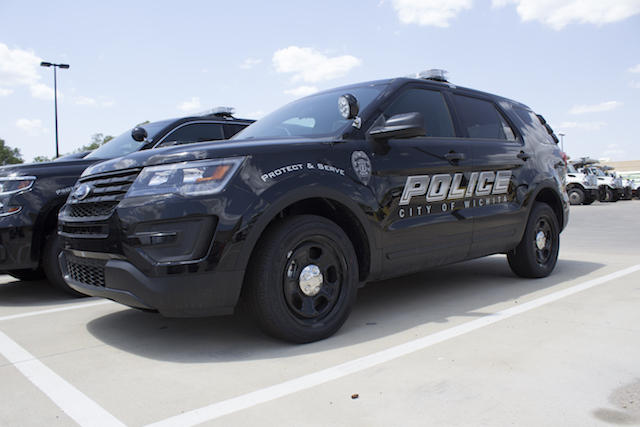 After making improvements, Wichita’s Fleet Maintenance division plans to get even better.

Some only make short-term plans, but the Fleet Maintenance division for the city of Wichita, Kan., prefers to take a long-term view. “We have a road map to ensure that not only do we continue to be here year after year, but eventually we will get recognized as a leading fleet,” Fleet Superintendent Troy Tillotson declares. 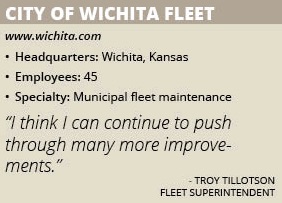 The division, which currently operates with a budget of $16.5 million, oversees maintenance for approximately 2,500 assets for the city, including nearly all of its operations except for airport and transit vehicles. “Those have not been brought under the umbrella of public works because of the federal grants,” he says.

In recent years, Tillotson says, the department has overcome the obstacle of a resource shortage and successfully streamlined its operations. When he took his current role, “I walked into a situation where there were very good employees that were not being assigned to the right tasks,” he recalls.

“We quickly corrected that,” Tillotson says, adding that his employees are empowered to make important decisions. “Because of the team in place, we’re able to make a significant number of improvements.”

Wichita’s Fleet Maintenance division has looked for areas where it can cut costs by outsourcing work. Previously, during weekends, the department kept mechanics on rotation emergency callouts for jumpstarts, tire repairs and tows.

These workers also were paid for overtime hours and were responsible for maintaining a larger wrecker. However, “It’s cheaper to contract it,” Tillotson says, noting that the division no longer has to pay the cost of the overtime hours for employees and can phase out an under-utilized wrecker.

“That saves us about $30,000 per year,” he reports. “It’s a significant amount of money, especially when you can make small decisions like that.”

The division also has re-examined its technology spending and recently underwent an RFP process for GPS services. During the process, “We found that the service that we were using was three times the cost of what we ultimately selected,” he recalls.

“That brought the GPS cost down from $180,000 to $60,000,” Tillotson says, adding that the division now uses T-Mobile Geotab for its vehicle tracking services. “We get better service with a system that will be modified and kept current.”

Another initiative for the Fleet Maintenance division has improved communication with public safety departments. Previously, Tillotson says, the division received complaints from front line staff members that they were not allowed input in their vehicles.

Since then, the division has formed committees with fire administration and fleet administrative staff members to participate in the design and bidding processes. “Even if the final vehicle is not perfect, in the long run, everyone feels like they had a seat at the table,” he says.

The division also holds monthly meetings with the fire and police departments to gain insight as well. “All of that would not be possible if we weren’t trying to be customer oriented,” he says.

Tillotson is a longtime veteran of the city of Wichita and previously worked in its finance department before switching to the Fleet Maintenance division. “I’m proud of the fact that I made a leap to a different type of career,” he says.

“I think I can continue to push through many more improvements,” he says, noting that these will allow it to become one of the leading divisions in the city and more broadly. “We have a good plan and a good future ahead of us.”