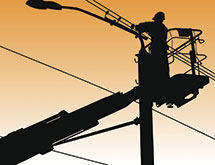 Serving very cold and wet areas, such as Minnesota, along with very hot and dry areas, such as New Mexico, keeps the expectations for Xcel Energy’s vehicle fleet high. Whether bringing natural gas to a remote region that has never had it, running electricity out to an oil well in west Texas or North Dakota, or maintaining international power lines that run through marshes in the summer, the company’s fleet has to maintain a high level of diversity.

This includes the standard bucket trucks used by utility companies, but also construction equipment with tracks that will not be punctured by mesquite residues in southwestern soil or equipment with flotation tires that can repair crucial hydroelectric power lines running to Canada through Minnesota’s marshy landscape in summer.

Xcel Energy operates in Minnesota, Wisconsin, Michigan, North and South Dakota, Colorado, Texas and New Mexico. Its fleet is maintained at approximately 62 service centers in those states, 48 of which have mechanics on staff, in large metro areas with up to 22 mechanics and in rural areas, one. The company also uses mobile mechanics or hires independent ones in cases when a staff mechanic cannot get to a vehicle or the workload is too big.

“We have relationships with a lot of local mechanics,” Director of Fleet Operations Gary Tucker points out. “We serve a lot of rural areas.” The company’s fleet of approximately 6,300 vehicles includes cars and light-duty pickup trucks for supervisors and corporate personnel; bucket trucks with booms for line maintenance personnel; and larger over-the-road trucks that can move wheeled and tracked construction equipment, such as digger derricks, cranes and any equipment a construction company would need.

“A lot of our areas are remote and really hard to get to,” Tucker emphasizes. “Transmission lines going across the mountains of Colorado are very difficult. We need a lot of snowmobiles, ATVs, anything you can think of.”

Besides maintaining existing transmission lines and pipelines, installing new lines on the outskirts of areas already served is a growing business for Xcel, along with installing natural gas pipelines in more remote areas where propane in tanks was used before. “The price of natural gas has gotten to the point where people don’t want propane anymore,” Tucker declares. “We’re getting a lot of pull from customers wanting natural gas out to their farms and in rural areas. We’ve been doing a lot of that. It’s one of our strongest growth areas right now.”

An upgrade in the company’s telematics system has helped conserve fuel and dispatch vehicles more quickly and effectively when their positions can be seen accurately in real time. “Now we can see where the crews are and who’s the closest,” Tucker points out. “It’s making them much more efficient. They’re loving it.”

It also helps the company conserve fuel by reducing idling to keep batteries from losing their charge. “We’ve been able to show them they don’t need to idle with the information that comes from telematics,” Tucker says. “We’re using it as an educational tool to show the guys there are other options, and they can save the company money if they don’t do those behaviors.”

This training occurs at monthly meetings. “It’s mainly for the operations managers, and they take that back and meet with their crews,” Tucker explains.

Xcel also is considering the use of auxiliary power units to reduce engine idling and increasing its use of compressed natural gas (CNG), which approximately 75 company vehicles employ. It is investigating use of hybrid vehicles for bucket trucks and electric vehicles in metropolitan areas.

Tucker estimates company vehicles log approximately 50 million miles annually, so whatever the company can do to conserve fuel will be multiplied exponentially over that number of miles. During the past several years, the fleet grew in size by approximately 20 percent.

A policy of waiting as long as possible to replace vehicles with new ones – up to 15 years – is being replaced by one that schedules vehicle replacement after 10 to 12 years. “That will change our operations a little bit, but it will have a nice impact on our downtime,” Tucker points out.