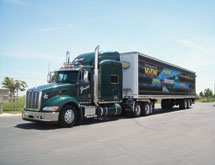 When former California Gov. Arnold Schwarzenegger signed into law the most-stringent greenhouse gas emissions standard known to the country, transportation operations throughout the state knew compliance would be expensive. The California Air Resource Board (CARB) has set out to reduce state emissions down to 1990 levels. Although the cost to comply is great, Alicia Yandell Hamilton of Yandell Truckaway explains that the cost of non-compliance is even greater.

“In 2008, we ended up buying the cleanest technology we could find, and that was during the worst economic times this country has seen since the Great Depression,” Vice President Hamilton recalls. “It was difficult and some carriers chose not to comply. But others, like ourselves, we saw the law was not going to be overturned. Now, we’re seeing others who didn’t comply are having to close their doors because the law is now being enforced.”

Hamilton’s grandparents, Jack and Dorothy Yandell, founded Yandell Truckaway in 1945, and it is now being run by the family’s second and third generations. The San Francisco Bay carrier got its start hauling wine bottles for the area’s local wineries. It then branched out to other related food-grade items, such as food packaging, boxes and bottles. It runs 100 trucks that travel within a 200-mile radius and owns and operates more than 1 million square feet of warehouse space. In 2011, Yandell Truckaway further branched out when it teamed with Santa Clara Warehouses and formed SC Wine Logistics to offer temperature-controlled TTB/ABC bonded storage. The unique beverage consolidation service streamlines shipments and decreases shipping costs.

Hamilton explains that with many operations exiting the market because of failure to comply with CARB standards, Yandell Truckaway’s services are in greater demand than ever before.  “We have had to explain capacity issues to a lot of our customers,” Hamilton says. “For us, January and February are usually pretty slow times, but we were at capacity every day this year and that’s something we’ve never seen before. We have to manage the customers we have, but we’re also always trying to seek new business, as well. The question we have to answer is how do you do that when you’re facing capacity issues.”

Yandell Truckaway has answered with investments in new technology. In the same way the company purchased new on-road trucks and warehouse forklifts to meet CARB regulatory demands, it has invested in technology that will help it keep up with customer demand.

For instance, Yandell Truckaway’s switch from paper logs to electronic logs has cut down on the time and effort of recordkeeping. It is also communicating electronically via text messages with its drivers. Hamilton says the new protocol allows drivers to quickly access information on their next delivery instead of calling into the office. It also diffuses some of the language barriers the company used to encounter due to the fact that many of its drivers speak English as a second language.

The company also invested in on-board cameras and GPS systems that not only help with safety, but also in tracking shipments, which is crucial with today’s customers.

“Customers want the status of their shipments throughout the day, whereas 10 years ago, they just wanted the truck to show up,” Hamilton says. “So pretty much anything we can invest in that makes it easier on the dispatcher, the driver and the administrative staff to keep up with our customers is worth its weight in gold.”

Giving its employees the resources to perform well is essential for Yandell Truckaway, especially considering the current driver shortage facing California and the rest of the country. The company actively seeks new drivers and other employees to help ease the current demand, but it also makes sure to invest in the staff it has now.

“We have little to no turnover with our staff now,” Hamilton explains. “Some of them have been with us for 30 and 40 years and our longest driver has been here 42 years. We have a nice core group of people that help set us apart from the competition. When our customers call us, they are not talking to someone new. They are talking to people that have worked for us for a long time and who continue to raise the bar on our service levels.”