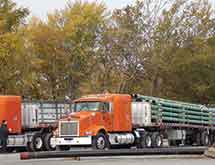 John and Mary Yourga founded Yourga Trucking Inc. in Wheatland, Pa., in 1945 when the United States was a post-war industrial powerhouse. “When the company was started, the steel industry was king,” Vice President of Operations Skip Doutt relates. “Then the pipe industry started to grow in this area, and we expanded into that. In the 1980s, when all the steel mills collapsed and went out of business, we had already moved forward into hauling pipe and tubing from the local pipe mills. So we continued to operate, not missing a beat.”

The company’s founders probably never realized how important that pipe would be to an energy industry that was not a major influence in the area until hydraulic fracturing was developed. “Pipe has been a major commodity for us for probably 40 years,” Vice President of Sales Marc Buskirk estimates. “The energy business is somewhat new to us because it’s somewhat new to the area. We really got involved in that about 2009.”

Yourga Trucking was approached by pipe distributors that did not have sufficient infrastructure in Pennsylvania to serve the energy industry that was developing there. Most of their infrastructure was in the Gulf Coast states.

“As it turns out, we were pretty well-suited for distribution of oil country tubular goods,” Buskirk says. “Where we’re at in Mercer County, there’s some, but not a tremendous amount of drilling – it’s definitely not the epicenter – however, we’re ideally suited for distribution here between the Marcellus and Utica shale. We’re storing and transporting oil country tubular goods – the casing used for the drilling, which is all steel pipe.”

Yourga Trucking provides more than just trucking. It has a railroad transfer facility at the trucking terminal, approximately 30 acres of outside storage and 100,000 square feet of indoor, temperature-controlled storage with four 33-ton overhead cranes. “We’re holding inventory for the distributors,” Buskirk explains. “They own it. We provide the space, material handling and the transportation distribution.”

The railroad serving Yourga Trucking is the class 1 Norfolk Southern line, so no short line switching fees or delays are involved. Additionally, three interstate highways serve Mercer County, and traffic congestion is rare. “We have the best of both worlds, with great rail service and excellent highway access to boot,” Buskirk adds.

One of Yourga Trucking’s competitive advantages is that it stores the casing in truckload quantities after measuring them in advance. “Most pipe yards load one row of pipe at a time,” Doutt explains. “We can pick up a unitized load and have the truck loaded in less than four or five minutes, and that truck can be on its way for a scheduled delivery. That’s where we believe our edge is.”

“We’re loading a whole truckload with one lift,” Buskirk adds. “We have a couple 55,000-pound-capacity forklifts. We’re loading 50,000 pounds in one lift and getting it done in a couple minutes, where the norm is that it takes a couple hours to load a truck with only a couple thousand pounds per lift.”

Yourga Trucking also stores in its proprietary software system the exact lengths of various diameters of pipe and the number of joints it is keeping in inventory for its distributor customers. “Every joint of pipe that we get in here, we have to measure and tally it in feet and tenths of feet,” Buskirk says. “When we get a release for a well site, they specify what size casing and exact footage they need, and we’ll have that pre-tallied in inventory, ready to ship.”

Another energy industry product that Yourga Trucking transports is noise suppression equipment for compression stations. These consist largely of prefabricated buildings that surround compressors and diesel engines to muffle their sound and reduce noise pollution.

The company has a fleet of 99 tractors and approximately 112 trailers that it purchases new. The tractors purchased in the last five years have hands-free audio communication, GPS, satellite radio and auxiliary power units.

Yourga has its own maintenance facilities at its terminals in Wheatland and Little Rock, Ark. Approximately one-third of its business is energy-related in the Marcellus/Utica shale region. Other major service areas include traffic lanes to and from the Midwest, East Coast, Ontario and East Texas areas.

The company is celebrating its 70th anniversary this year and plans to concentrate on the energy industry in the future. Doutt attributes the company’s longevity to dedication to the business. “No. 1, it’s the facility we have here, it’s the people and the entire operation,” he says. “The business has developed over the years from the transportation side as a motor carrier into a full-service transportation company. [For the future,] we think this energy play is here to stay.”