Back to Profile Gallery > RMT Inc. 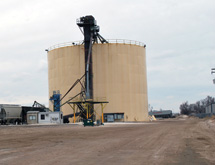 The fluctuation in natural gas and oil prices has led to fluctuation in production, and Walt Sanders, president of RMT Inc., says that support service companies such as his have to be able to ebb and flow with the changing demand.“This industry is still very reactive based on the price of natural gas and oil,” Sanders says. “It’s amazing with fluctuation how fast a company can shut down a process or stop working. And at the same time it’s amazing how fast they move. If they find an oil play in Arizona, you can guarantee someone can be down there in a short period of time.”

RMT is an independent operator of transloading facilities. As a service company, RMT is contracted by companies that own or lease railroad transloading facilities. RMT operates the entire transfer of frac sand off of rail cars and onto truck trailers so it can be sent to the oilfields. The company began in 1994 when it won a contract to operate a facility in Denver for a frac sand producer and supplier. Today, it operates six facilities in three states. Five of those facilities are operated exclusively for major frac sand supplier Unimin.

“For Colorado, we are primarily serving the Denver Julesberg Basin,” Sanders says. “So we have three locations that work specifically servicing that basin in Colorado. And then we operate two facilities in Pennsylvania for the Marcellus Shale and one in Ohio for the Utica Shale.”

Because RMT has been in the frac sand shipping business since 1994 – well before the advent of hydraulic fracturing exponentially increased frac sand demand – the company has insight in this specific industry that newcomer competitors don’t. Sanders says the company’s long experience and reputable standing in the business has paid off as the market has grown.

With the increase in oil and gas production comes in an increase in frac sand producers competing for the same business. The current oversupply of frac sand has caused prices to drop, so Sanders says suppliers are looking for ways to differentiate themselves from the pack. Having the speediest delivery in town is one way to do that.

“We are on the leading-edge of how to start up and run frac sand terminals,” he says. “We have 19 years of experience and we understand the customer’s biggest needs. We understand that as soon as that truck comes, it needs to be loaded. We need to get trucks in and out. It’s also necessary to be available 24 hours a day, which has been one of the biggest changes within the last few years.”

Back in the 1990s, Sanders says RMT operated until 9 p.m. and closed on the weekends. Those hours, however, no longer mesh with this booming industry. Because horizontal fracking has become a 24/7 business, RMT has, as well. But that’s not to say that all of those 24-hour days are bustling with activity. Oil and gas producers are practicing just-in-time, a process in which they want what they want and when they want it – no more and no less. The tradeoff is that in today’s market the single-order volumes are much higher than yesteryear’s.

“In the mid-’90s, jobs were 150,000 pounds and now some are 3 million to 5 million pounds and beyond,” Sanders explains. “So the volume of sand being requested is significantly higher. At the same time it fluctuates in demand because of the huge upfront volumes. They might not need any sand for a day or two and then in the next couple of days you have to be ready to handle those same large volumes again.”

Sanders says the key to being flexible isn’t so much in the technology as it is in the people. RMT does use best practices, such as creating job summary sheets to track the amount of sand being shipped and conducting next-day audits to make sure everything was shipped correctly. However, he stresses that extensive training and also cross-training are what ensure the company is prepared to handle every job. RMT makes sure its employees are well-equipped to handle each job.

“We are a services company and as a service company it’s all about the people,” Sanders says. “We have some dedicated people and we reward them by promoting from within and making sure work is always available, even during slow times.

“When you have employees with the right attitude it makes a difference to the customer and it makes them want to do business with us.”