Back to Profile Gallery > Southwest Airlines 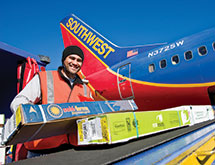 Southwest Airlines (SWA) Car–go’s vision and commitment to quality customer service hasn’t changed over the years, but nearly everything else about the operation has. Its technology, service areas and shipping capacity have all adjusted and expanded to serve a customer base that has also changed right along with everything else. Vice President of SWA Cargo and Charters Matt Buckley recalls serving a very different customer when the company began operating in the early 1970s. Back then it was primarily small packages, photo films waiting to be developed and canceled checks. But with the advent of the fax machine and industries going digital, shipments today look vastly different.

“We announced the acquisition of AirTran in September 2010 and established the legal close in May 2011,” Buckley says. “We have been feverishly working on integrating AirTran into SWA for passengers which enables cargo connectivity as well. We were excited to introduce our cargo products and services into the AirTran route structure on April 14th [2013].”

In addition to growing its to-and-fro service in Atlanta, SWA Cargo added some new markets. Richmond, Va.; Charlotte, N.C.; and Rochester, N.Y., were added to the roster on April 14, 2013. It began servicing San Juan, Puerto Rico. As it inducts new markets, it will continue to grow existing ones.